Michael Bublé: My Wife Is Killing Me with Her Name Choices

"My wife is killing me; we fight about the names," he shares. "She keeps coming up with names that she thinks sound good in Spanish, like 'Dirt.' Dirt Bublé!"

Michael Bublé may be a smooth singer, but those steamy skills don’t seem to always transition into the bedroom.

When it came time to bring a baby into the mix, Bublé, 37, jokes he and wife Luisana Lopilato got right down to business.

“There was nothing sexy about it. My wife is so beautiful, but it wasn’t like that,” he says during an appearance on The Graham Norton Show, airing Thursday.

“She was very, ‘You know what Mike, it’s nine o’clock on Tuesday night and we must do it now.'”
[cmtest width=”600″ height=”30″]
But while their team effort paid off — Bublé and Lopilato will welcome a son in August — the dad-to-be and the Argentine actress are at a standstill when it comes to their son’s name.

“My wife is killing me; we fight about the names,” he shares. “She keeps coming up with names that she thinks sound good in Spanish, like ‘Dirt.’ Dirt Bublé!”

Ecstatic for the upcoming arrival of his baby boy, Bublé, who’s been serenading Lopilato’s stomach, isn’t letting anything stand in his way when it comes to being a doting dad — even if his audience is a little hard of hearing.

“[I was singing to the baby] early on, really early on, and I didn’t know because I’ve never had a baby before … and in the middle of singing my wife starts laughing and says, ‘The baby is two months and has no ears to hear you!'” he says.

Baby Boy on the Way for Michael Bublé

Michael Bublé: My Son's Birth Wasn't 'Life Changing' - Until the Next Day

Michael Bublé Wants Children – When His Wife Is Ready 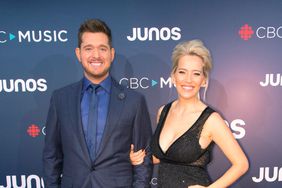