To those Internet reports claiming M.I.A. named her 3-week-old boy Ickitt, the rapper responds: Ick! In a humorous message on her MySpace Celebrity Blog, the “Paper Planes” songstress shot down the rumors while poking fun at a few of the more unique names bestowed upon certain celebrity kids.

“MY BABY IS NOT CALLED ICKITT, PICKIT OR LICKIT THANK YOU VERY MUCH, ” she writes. “HES A BABY, HE DONT NEED PRESS!”

Explaining that she doesn’t consider her son’s name to be newsworthy information, M.I.A., 31, says she’ll be back with something for her fans soon. “TILL THEN GO PICK ON APPLE, SATCHEL AND MOON UNIT,” she suggests.

Her son, born February 11th, is the first child for M.I.A., whose given name is Mathangi Arulpragasam, and her musician fiancé, Benjamin Bronfman.

Memorably performing while pregnant at the Grammys last month, M.I.A. was also nominated for an Oscar for her song “O Saya,” from Best Picture Slumdog Millionaire. 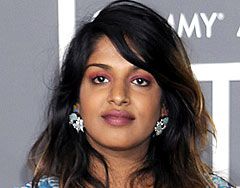 And the Winner Is Mom!