Mena Suvari Is Pregnant! Actress, 41, Expecting First Child: 'All I Ever Wanted for Years'

Mena Suvari and husband Michael Hope will welcome their first child, a son, next spring

Mena Suvari's dream is coming true: She's going to be a mom!

The American Beauty actress and her husband Michael Hope are expecting their first child, a baby boy, she tells PEOPLE exclusively.

"It's still this process for me of believing it and accepting that something this beautiful could happen for me," says Suvari, who will welcome her son next spring. "It's been a very emotional experience. It's very weird finding out — I was like, I can't believe it!"

"I've had to learn how to be a different way with my appetite and my sleep habits and not pushing myself, asking for help — all these things are hard for an independent woman!" the mom-to-be tells PEOPLE.

Although the couple, who wed in 2018, were hoping to grow their family, Suvari admits the pregnancy still came as a surprise. Earlier this year, Suvari and Hope decided to actively start trying for a baby — and what ensued was months of an emotional rollercoaster met with its fair share of disappointment.

"I was recording my temperature every morning and peeing on these ovulation sticks," the mom-to-be explains. "You expect that it'll happen and it didn't. I got to this place where I felt overwhelmed and stressed out."

Adding to the pressure to conceive quickly was Suvari's age. "I'm 41 and there's this air of like, I've got one foot in the grave and good luck," she says, sharing that the mounting stress and continuous negative pregnancy tests made the actress finally take a step back.

"I was like, I can't do this anymore. I'm so tired of stressing over this. I was trying to feel like if it's meant, it's meant," she adds. "I was being really open like the Aquarian that I am — if this is my path or not."

Suvari shifted her focus back to her work, traveling to Georgia in mid-July to film on location. It was there, she recalls, that she suddenly felt a sudden shift in her body.

"At first I thought I was having jet lag because I'm really sensitive," Suvari remembers. "By the end of July, I had a couple of other symptoms and I decided to take a test and there it was. It was a huge surprise, an absolute miracle!"

Suvari continues, "It was something that we've always wanted, but a couple months before, I had stopped calculating. I pulled back and let go, which apparently they say that that's when it happens."

In the end, Suvari credits her ability to trust in her own body despite outside opinions on her maternal age. "Even in my late 30s, I had people questioning me. It put a lot of fear in you," she says of becoming a mother later in life. "It took a lot of work to really pull back from that and really believe and trust in my own body and where I was at, have my own journey with it."

"One of the doctors that I saw, he asked if this was an old-fashioned pregnancy. I was like, 'Well yeah, why not?' It doesn't have to always be another way." she adds. "Yes, it's wonderful that we have that, but I really want women to feel empowered with themselves. If you know your body and you feel healthy, I think that it's just a matter of time. That's what happened to me."

After basking in their baby bliss, the couple were thrown for a loop when it was time for Suvari to schedule her first ultrasound. After calling to confirm the appointment, the actress was taken aback to learn her husband would not be able to join her due to the ongoing coronavirus pandemic.

"I remember talking to my doctor and they were like, 'Okay, you have to wear a mask, you have to come alone ... ' I was like, 'Wait a minute, he can't come?' They were like, 'No, sorry.' My husband came home and I told him and we were both so sad," she says.

"I was able to take videos, but when you think about it, this is a once in a lifetime opportunity," the mom-to-be adds. "Obviously we know we do what we have to do, but it feels like you're missing out. Now we have our videos and those are good memories. At the end of the day, we're very grateful.

Now almost halfway through her second trimester, Suvari is indulging in her pregnancy cravings — for the mom-to-be, that's been plenty of fruit and Indian cuisine — as she prepares to welcome her son, whom the couple have decided to name after his late grandfather. Despite having an "amazing" doctor, the American Pie star is opting for a midwife and a home birth when it comes time to deliver.

"When I thought of what I wanted, [my midwife is] like the embodiment of Mother Earth. I was like, this is the vibe that I want," she says of having a natural birth plan. "I know none of these things we can control and so much of it changes. We'll find out what the real deal is, but that's my plan and I hope it can go that way."

As she turns her thoughts toward the couple's future as a family of three, Suvari is excited about bonding with her baby boy. Her son's childhood, she promises, will be spent with present parents prepared to soak up all the lessons he will teach them.

"I've always had this attitude of, I can't wait to get to know them. I just want to be like, who are you? Where do you come from? What do you have to teach me?" says the expectant star. "I want to give as much as I can and try to communicate as much as possible and be really present."

Jokes Suvari, "But I don't want to be that helicopter parent! I feel like my husband is going to be the cool one and I'm going to be the one that's nervous about everything."

"I'm still falling into that place and just feeling so honored that he came to us," she says. "It's all I ever wanted for years. Even before I met my husband, I always wanted a little boy and it just feels so beautiful and special." 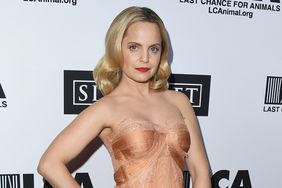 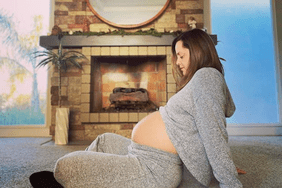 Pregnant Mena Suvari Says 'Nothing Else Matters' as She Prepares for Son: 'He'll Come First'