The ER star and his fiancée have their first child together

ERs Mekhi Phifer and his fiancée Oni Souratha have welcomed their first child together, his rep tells PEOPLE exclusively.

“We are really happy and excited,” the couple tells PEOPLE. “He is beautiful.”

The boy joins Omikaye, the actor’s 8-year-old son from a previous relationship.

The couple showed off their son’s green-themed nursery to some 200 friends – including Don Cheadle and others – at their baby shower earlier this month.

“This is just the start of the tribe,” Phifer, 32, told PEOPLE at the shower. “I want to have four or five kids.” 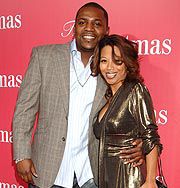 Mekhi Phifer is prepared to become a father (again)