From Jennifer Lopez & Max to Matthew McConaughey & Levi, see how stars and their Hollywood tots are taking to the waves

Two months after welcoming son Noah, the Victoria's Secret model shows off her impressive post-baby body while hitting the surf with her 3-year-old along the Malibu, Calif., coast July 8.

The father-daughter duo don matching red swimsuits for a July 1 day at the beach in Malibu, Calif., where Warren gave his 4-year-old Mini Me lessons in navigating the waves.

Prior to welcoming daughter Penelope, the pregnant reality star stays focused on her stylish main man, 2, chasing after him along a Mexico beach April 14.

It's up, up and away for 16-month-old Ava, who gets a lift from Mom while dad Tye Strickland looks on as the family soaks up some sun June 28 at Zuma Beach in Malibu, Calif.

All good, little man? The actor sticks close to his 18-month-old son while watching him explore New Zealand's sandy shores May 13.

The Grey's Anatomy hunk gives his 2-year-old a leg up while taking her for a stroll June 3 alongside the Malibu, Calif., surf.

The American Idol judge snaps away at her 4-year-old son as he and her beau Casper Smart bury one of the star's bodyguards during a June 25 Brazilian holiday in Rio de Janeiro.

Catch me if you can! The celebrity stylist plays catch-up to her fast-footed 16-month-old son during a July 7 beach trip in Malibu, Calif.

Arms up! Grey's Anatomy's leading lady holds tight to her excitable 2-year-old as they go for a dip off the coast of Maui, Hawaii, on June 7.

With husband Sacha Baron Cohen attending the Cannes Film Festival, the mom of two introduces her youngest, 1, to France's sandy shores, carefully helping her wade into the water May 17.

In a reversal of roles, dad-to-be McConaughey gets the jump on his 4-year-old while playing at the beach in Malibu, Calif., on May 30. 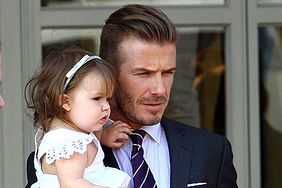