Dear friends, my husband Gareth and I are thrilled to announce thatwe are expecting our third daughter in late summer. Eva and Katie are very excited to have a new baby sister. Three girls, what a magic number!

I’m very excited. We know what it is -– it’s a girl. I’m feeling good now, although I wasn’t! Carrying one instead of two will be much easier.

Martie and Gareth are already parents to fraternal twins Eva Ruth and Kathleen ‘Katie’ Emilie, now 3 ½. This fall, while sharing her fertility struggles, Martie revealed that she had begun an IVF cycle in August.

Thanks to CBB reader Sarah. 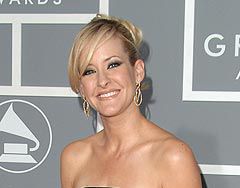