Mark Wahlberg has Sept. 2 forever etched in his memory.

On that day in 2003, the 50-year-old actor welcomed his daughter Ella into the world. It was the same day his sister Debbie had a heart attack and tragically died.

Eighteen years later, Mark paid tribute to both women on the emotional anniversary with a heartfelt Instagram post.

"Happy B day my Ella❤️🎁18 years old 😚wow how time flies. So proud of you !! Always A [bittersweet] day," he captioned a pair of images.

The first image was of the Oscar-nominated actor proudly holding his daughter while smiling for the camera. The second featured a shot of a picture frame with a photo of Mark hugging his late sister.

"Missing my big sister Debbie💔Ella's Guardian angel🙏❤️🙏😇," he continued in his caption.

Debbie was one of nine Wahlberg children, including brothers Donnie and Robert. The family grew up in Dorchester, a neighborhood in Boston, Massachusetts.

Ella is one of Mark's four children with wife Rhea Durham. Michael, 15, Brendan, 12, and Grace, 11, round out the famous family.

Back in July, Mark told Entertainment Tonight that his goal is to give his kids as normal a life as possible, noting the pros and cons that come with being a famous father.

"My kids wanna have their own identity, you know? I'm not allowed to get out of the car at football practice or a game," he explained. "I gotta sit in the car and watch."

"At first I took it personally, because I wanna be there to support them, but supporting them is by making them feel comfortable in what they're doing and them having their own identity too," the Infinite actor continued. "It's very difficult."

Mark's fatherly instincts were put to the test in his latest movie Joe Bell, which tells the real-life story of an Oregon man that takes a cross-country journey on foot following the death of his 15-year-old son Jadin, who was gay.

During his trek, Mark's character raises awareness around bullying and suicide prevention. Bell was hit and killed by a tractor-trailer six months in at age 48.

"I just felt like diving right in wanting to really understand who Joe was, wanting to make sure that the family knew what our intentions were because it's obviously an overwhelming amount of responsibility when telling a story like this and knowing how would it affect [Bell's widow] Lola, how would it affect [Jadin's brother] Joseph?" the actor told the outlet.

The Powerful True Story Behind Joe Bell, About a Father Who Honors His Gay Son After His Death

In an interview with Fox News, Mark said being a father impacted his approach to portraying Bell. He wanted to get the part just right.

"Hopefully it would maybe bring some healing and, more importantly, prevent other families from having to go through the same thing," he added.

The actor also said wanted to assure people — especially parents — are doing all they can to listen to their children, show their love and support "unconditionally" and cheer them on in whatever they choose to do "as long as it's positive, productive." 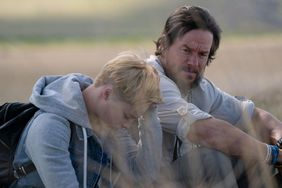