Mario Lopez looks good wearing next to nothing – but he’s absolutely dashing in a suit.

In photos from his weekend nuptials to actress Courtney Mazza, Lopez, 39, looks like a classic handsome groom dressed in black and white as he leads his bride, wearing a lace Ines Di Santo gown – and their adorable 2-year-old daughter Gia – down the aisle after tying the knot.

The trio also shared the spotlight as they cut the enormous pink multiple-tiered wedding cake as a family, after Mazza changed into a second Ines Di Santo dress. The cake, a winter-wonderland-meets-beach theme creation, was by Cake Boss star Buddy Valastro.

All the Details on Courtney Mazza’s Wedding Day Hair

The lavish wedding, which featured a mariachi band and was also attended by the Extra host’s close pal Eva Longoria, was held on the beach in Punta Mita, Mexico, on Saturday.

The wedding will be featured in a two-hour TLC special called Mario & Courtney’s Wedding Fiesta, slated to air Dec. 8. 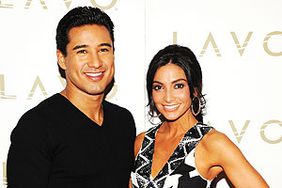