Mariah Carey's holiday cheer comes just two weeks after her hit song "All I Want for Christmas Is You" topped the Billboard Hot 100 chart at No. 1

Mariah Carey is celebrating Christmas on a high note.

The music legend enjoyed the holiday in Aspen, Colorado, with her ex-husband Nick Cannon, 39, along with their twin son and daughter Moroccan and Monroe, 8. Her boyfriend Bryan Tanaka also joined in on the Christmas fun.

Carey shared several photos and clips from their festivities on Instagram. On Christmas Eve, she posed alongside her two children (wearing a red ski suit and a matching scarf) for a Boomerang video that captured the trio playing with snow. She also posted a similar clip with Tanaka, who can be seen falling into the snow in the background.

“Beautiful! Merry Christmas to you all x,” one Instagram user commented. While another noticed Monroe’s cartoon-themed skiwear and wrote, “Omg roe’s hello kitty ensemble.. like mother like daughter?”

Cannon also shared a few photos on his Instagram and captioned one with the twins, “Great way to spend Christmas Eve!!”

A second picture of Cannon with Monroe showed the daddy-daughter pair snuggling up together.

Mariah Carey Celebrates as ‘All I Want for Christmas Is You’ Tops Billboard Hot 100: ‘We Did It’

The Grammy-winner and her blended family spent Thanksgiving together as well. Last month, she shared a series of photos from their holiday festivities.

The family’s Christmas cheer comes less than two weeks after the icon’s hit song, “All I Want for Christmas Is You” topped the Billboard Hot 100 chart at No. 1 for the first time since its 1994 release. It’s the first holiday track to top the chart since “The Chipmunk Song,” by The Chipmunks, in 1958.

Carey announced the news of her music breakthrough on social media and quickly received support from fellow celebrity pals.

“We did it ?❤️???” Carey wrote on Twitter in celebration of her major milestone responding to Billboard’s tweet announcing her accomplishment. The singer shared a photo of her tweet on her Instagram as well, using grateful hands as her caption: “???.”

Mariah Carey Just Released a New ‘All I Want for Christmas Is You’ Video — Featuring Her Kids!

Stars including Chance the Rapper, Ryan Reynolds and Kelly Ripa showed their support by commenting on her joyous post.

The singer released a new music video for the hit song featuring Moroccan and Monroe last week and it has already racked up millions of views. 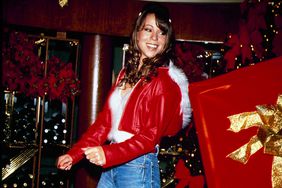 Mariah Carey Celebrates as 'All I Want for Christmas Is You' Tops 'Billboard' Hot 100: 'We Did It'