Maren Morris Dismisses Troll's Comment on Cleavage: 'Don't Let My Boobs Knock You on the Way Out'

In the Instagram comment section of one of her latest selfies, the new mom joked that her bustier chest is only "temporary"

Maren Morris had a laugh-out-loud response to a commenter who took issue with the nursing mom's cleavage.

On Tuesday, "The Bones" singer, 30, posted a pair of photos on Instagram showing off her newly done hair. "🌊 w a v y 🌊 hair," Morris captioned the post, in which she wore gold eye makeup and modeled the look in a revealing, light blue top — which at least one commenter couldn't get past, leaving a message of disapproval.

"Wavy hair as the camera is only on your t--s . Yes it’s distasteful for sure," wrote the commenter, criticizing Morris — who welcomed son Hayes Andrew with husband Ryan Hurd four months ago — for her cleavage.

"Come on if your caption reads wavy hair maybe keep the focus on the hair, or perhaps make the caption big boobs ? Just saying like holy cow," continued the Instagram user. "Everything in this world doesn’t make sense anymore , clearly these littles don’t have much to look up to either."

Morris eventually dismissed the commenter, replying to the user and laughing off her message. "Girl BYE. Don't let my boobs knock you on the way out. 😂👋," responded the singer.

Also in the comment section, Hurd, 33, left a playful note to his wife, writing simply, "great hair," to which Morris wrote back, "I knew you'd notice." Her friend Karina Argow joked about Morris' busty figure and her caption about waves, writing, "Let’s get a motorboat out on those wavesssss." Morris jested back: "Girl these are temporary. Yours are for lyfe. 😂"

"Mom boobs for life. If you're offended, sign off," Morris added on Twitter. "Sorry I've been wearing a nursing bra and sweatpants for 4 months and decided to get dressed up."

In May, Hurd told PEOPLE about what it's been like for him and Morris becoming new parents during the pandemic. The family has been self-isolating in Nashville with their new addition, enjoying the uninterrupted quality time.

"Life isn't that different from the way that we planned it, to be honest. We were going to be off the road right now," he said at the time. "It's a little harder because we can't really have anybody over to see our baby, but I feel like we're very blessed in that we have avoided a lot of hardships that other artists have had to face, because we haven't had to really cancel many shows."

Added Hurd, "We're really lucky to just be here learning how to be a family of three, and it's been really an amazing time in our lives."

Hurd and Morris, tied the knot back in 2018, five years after they first met while co-writing a song for Tim McGraw. The new dad said he was thrilled to expand their family.

"You imagine what it's going to be like, and then it ends up happening — and it feels like you couldn't imagine ever going back to just being the two of you," Hurd said. "So we're really lucky to have him here and have both of them healthy."

Announcing the March 23 birth of Hayes Andrew, Morris shared a gallery of photos on Instagram, including the country star holding her sleeping son while in a Nashville hospital bed and a shot of a smiling Hurd holding the newborn.

“Love of our lives,” she captioned the post at the time. 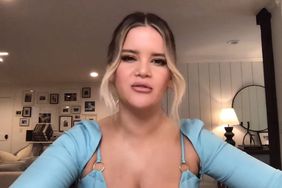 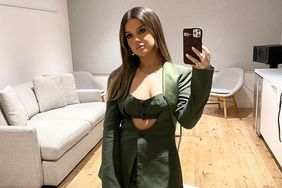