"Being a good person, working hard, achieving goals — that's what it's all about," Lori Loughlin previously said of what she wanted to instill in her girls

Before Lori Loughlin gained national attention on Tuesday for potentially being involved in an alleged college admissions cheating scam involving elite colleges and universities, she referred to herself as a “strict” parent to her daughters Olivia Jade, now 19, and Isabella Rose, now 20.

In a 2015 interview with PEOPLE, the 54-year-old Fuller House actress — best known for her role as Aunt Becky on the family-friendly Netflix series and its predecessor, Full House — said of her girls that she’d “like to think I’m somewhat their friend, but more importantly, I am their mother and a guiding force.”

Federal court records unsealed Tuesday in Boston name 50 people, including Loughlin and former Desperate Housewives star Felicity Huffman, who have been allegedly indicted as part of the nationwide scheme, according to a release from the U.S. Attorney’s Office in Massachusetts. The scandal involves admissions to schools like the University of Southern California, Yale, Georgetown and Stanford, among others, PEOPLE confirmed on Tuesday.

While Huffman allegedly gave $15,000 “to participate in the college entrance exam cheating scheme on behalf of her oldest daughter,” the indictment states, Loughlin and husband Mossimo Giannulli “agreed to pay bribes totaling $500,000 in exchange for having their two daughters designated as recruits to the USC crew team — despite the fact that they did not participate in crew — thereby facilitating their admission to USC,” state the documents.

The complaint alleges that Loughlin and her fashion-designer husband had her daughters pose as coxswain for a local crew team and on rowing machines, adding that federal agents obtained emails from Loughlin and her husband allegedly implicating them in the scam.

Starting on April 22, 2016, Giannulli allegedly emailed an unnamed cooperating witness and copied Loughlin, saying that he and his wife had just met with Isabella’s college counselor and that he wanted to “fully understand the game plan and make sure we have a roadmap for success as it relates to [our daughter] and getting her into a school other than [Arizona State University]!”

On July 24, 2016, the corroborating witness allegedly emailed Giannulli essentially saying his older daughter was unlikely to get into USC on academics alone. “Thereafter, the Giannullis agreed with [the witness] to use bribes to facilitate her admission to USC as a recruited crew coxswain, even though she did not row competitively or otherwise participate in crew,” the complaint alleges.

That September, Giannulli allegedly sent the witness an email of Isabella on a rowing machine a month before Donnal Heinel, the senior associate athletic director at USC, allegedly presented the teen as a recruit to the crew team. Several months later, in 2017, USC mailed Isabella her formal acceptance letter, the complaint alleges. Later, when the witness allegedly asked if they would need help with their daughter, Loughlin allegedly added, “Yes USC for [our younger daughter]!”

The complaint alleges that the corroborating witness devised a plan to “present their younger daughter, falsely, as a crew coxswain for the L.A. Marina Club team, and requested that the Giannullis’s send an ‘Action Picture,’ asking a few days later for a picture on the ‘erg’ — or rowing machine, which Giannulli did a few days later.”

Heinel presented Olivia to the USC subcommittee for athletic admissions on or about November 2, 2017, when a subcommittee approved her conditional admission to USC, the document states. After her daughter’s admission, Loughlin allegedly emailed the corroborating witness, “This is wonderful news,” and used a high-five emoji.

In December 2017, the guidance counselor at Olivia’s high school questioned her being recruited for crew at USC like her older sister when she didn’t row, which Giannulli allegedly fraudulently confirmed for the counselor the following April, according to the complaint.

Reps for both Huffman and Loughlin did not immediately return calls by PEOPLE for comment, while a statement to PEOPLE from USC stated the Los Angeles school had not been “accused of any wrongdoing and will continue to cooperate fully with the government’s investigation.”

Loughlin previously told Your Teen, in an interview published when her daughters were 14 and 15, that she “was raised to be a grateful and courteous human being” in “a nice, down-to-earth family with no sense of entitlement.”

“My girls have rules to follow. My husband and I teach them good manners and gratitude. And, it’s funny — when we are out with kids who are, in their opinion, somewhat spoiled or impolite, my girls really notice and comment,” said the actress. “And, I always say to them, ‘Let that be a lesson to you. People notice if you have manners, if you’re courteous and if you’re kind. People pay attention to that stuff.’ ”

“It’s important just to be a good human being and put your best foot forward because certainly, like my grandmother used to say, ‘We all came into the world the same way, and we will all leave in the same way, and no one is more special or better than the next guy,’ ” Loughlin continued. “That’s what I try to instill in my kids.”

“I always tell my girls that being famous isn’t all it’s cracked up to be,” she added. “Being a good person, working hard, achieving goals — that’s what it’s all about. Fame doesn’t mean very much.” 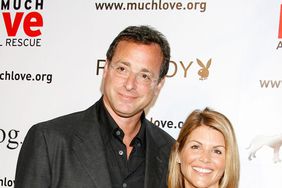 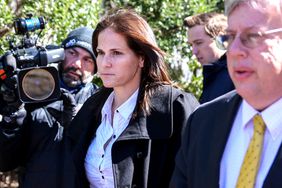