It sure “Feels Like a Party” — LOCASH’s Preston Brust is now a father of two!

“…and just like that, our hearts have opened up in all new ways,” Brust tells PEOPLE. “Every map in life needs a Legend. We’re so blessed.”

A rep for LOCASH tells PEOPLE baby Legend arrived a bit earlier than expected, making for some delivery drama. The band — who released their new single “Feels Like a Party” on Friday — was scheduled to perform in Ohio that night when Brust got the call his wife was going into labor. One canceled show and a number of flights later, he arrived back to Nashville just in time to make it into the delivery room with Kristen.

The couple announced their pregnancy in April with a sweet family photo.

“With full hearts, we’re excited to announce we have a new roommate movin’ in this #August!” the singer-songwriter wrote on Instagram.

The new addition comes after the couple shared their emotional and heartbreaking miscarriage with the world in 2017. Kristen wrote in her blog that she learned there were complications with her pregnancy at an ultrasound nine weeks into her pregnancy.

“Having a daughter, almost 1 year old, we knew what the screen would show and we were prepared to fall in love all over,” she wrote, adding that instead they were confronted with “a tiny glimpse of something, but not developed enough to make out head from sweet little tail.”

Ten days later, a second ultrasound confirmed that the couple was entering a chapter which Kristen called “wait to lose.”

On Jan. 17, “God took our baby. Twenty short days after our first ultrasound,” Kristen wrote on her blog. “The greatest lesson in all of this is about empowering yourself to recover. That you need to heal.”

She added that it is important for women who have suffered miscarriages to remember they are not alone, writing, “Remember this, this one in three walks with you. I am one in three. I have lost. I am one.”

Kristen and Preston Brust at the CMA Awards in November

Kristen has been public with her appreciation for her musician husband’s attentiveness to their daughter.

“The difference between a good dada and the very best dada is a set of butterfly wings (oh and a few “Flying lessons”)),” she wrote on Instagram June 27.

Legend is a lucky boy! 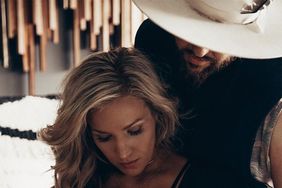 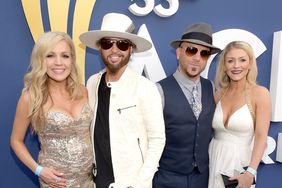