Larry the Cable Guy and Wife Cara: How We Healed Our Son's Hip Dysplasia

At just a few days old, Wyatt was diagnosed with hip dysplasia, a looseness of the hip joint that can lead to crippling arthritis in children and adults.

Dan Whitney has spent most of his life making people laugh as his alter ego, Larry the Cable Guy.

But when the comedian and his wife Cara welcomed their first child, son Wyatt, in August 2006, things took a serious turn.

At just a few days old, Wyatt was diagnosed with hip dysplasia, a looseness of the hip joint that can lead to crippling arthritis in children and adults.

Initially, the diagnosis “kept being said as, ‘This is no big deal,'” recalls Cara, who soon grew frustrated with a lack of universal information about the condition.

“When I’d go to ask questions, the doctor just didn’t have the answers,” she adds. “I was like, ‘This is crazy. For something that’s so common, how come nobody has any answers for it?’”

In fact, the condition is the single most common abnormality in newborns, affecting as many as one in every 20 infants. In many cases, the first line of treatment is known as a Pavlik harness, a shoulder-to-toe device that helps hold the hip in the joint.

For the Whitneys, having their newborn son in the harness 23 hours a day took an emotional toll.

“I’d get one hour out of 24 when I got to squeeze him and hold him like a real baby,” notes Cara. “Being my first child, I really wanted that.” Adds Dan: “It really stunk.”

Even worse was when the Whitneys got the news that the harness hadn’t worked, which meant that their son now faced the prospect of months in a full body cast or major surgery. But then came an unorthodox third option: Dr. Chad Price, a pediatric orthopedist and an international authority on hip dysplasia at Orlando’s Arnold Palmer Medical Center, suggested that Wyatt be refitted with the harness again around 8 months old. This time, he wore it for another seven months — and it worked.

Amazed at how well their son had healed, Cara, 34, was determined to make sure Dr. Price’s expertise could reach more patients, parents and doctors. “Cara identified this information gap,” says Dr. Price. “She followed her instincts and asked questions and she’s put the resources behind making a change.”

Through their Git-R-Done Foundation, the Whitneys have given $5 million to start the International Hip Dysplasia Institute at Arnold Palmer Medical Center to help exchange and advance knowledge of the condition.

“[The doctors] basically said, ‘Look, if we can get this institute up and running, this is something that can actually be cured. It can be to the point where no one will ever have to have a hip surgery from hip dysplasia,’” explains Dan. “So that kind of fires you up a little.”

A key initiative of the IHDI is to educate parents and caregivers about “safe swaddling.” Traditional swaddling — in which an infant’s legs are stretched out straight — may be a contributing factor to hip dysplasia, so the group instead recommends swaddling in a way that allows the baby’s hips and legs to move freely.

To better spread the word, Cara is personally sending out individual letters to every pediatrician in the country — more than 50,000 in all. And Dan couldn’t be more proud of his wife’s determination. “From day one, she researched it and wrote letters. When I’d read the letter I’d think, ‘Good grief! My wife wrote that? When did you go to Harvard?’ She’s a go-getter.”

These days, so is Wyatt. Now 4, “he’s all about football, basketball, wrestlin’, bull-ridin’,” says Dan, 47, whose new series Only in America with Larry the Cable Guy debuts on the History Channel early next year.

Although Wyatt will continue to go for yearly X-rays until he is a teen, Dr. Price doesn’t anticipate any future problems. For that, Dan and Cara — who are also parents to 2½-year-old daughter Reagan — feel immensely fortunate and are eager to continue giving back.

“I’ve always felt that if you’ve been blessed, you should try to help as many people as you can,” says Dan. “I just think that’s the right thing to do.” 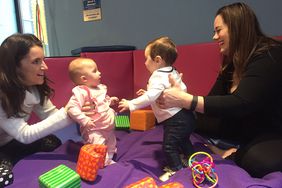 Babies of Longtime Friends Overcome Same Debilitating Hip Condition: 'We Comfort Each Other'