Morgan Smith's third child is due in January 2020

Laguna Beach alum Morgan Smith is going to be a mama for the third time!

The former MTV personality and Minnow Swim founder is pregnant and expecting her third child with husband Joel, she announced on Instagram.

“Countdown is on! All excited baby #3 coming in January 👶🏻☀️ #smithsinthesouth,” Smith (née Olsen) captioned a photo of herself cradling her baby bump on Sept. 1.

In the sweet photo, captured in Charleston, South Carolina, Smith is all smiles as she stands beside her two children: son Theo, 5, and daughter Georgia, who turns 3 on Sept. 24.

As Laguna Beach fans recall, Smith appeared on the MTV reality series from 2004 to 2005.

At the beginning of August, Smith announced that she and her family were “swapping coasts” and moving across the country from Newport Beach, California to Charleston.

“From Newport to Charleston, covering coast to coast. (while Joel remains at his job working remote)” she explained. “We’re so excited for this next chapter for the business + new adventure for our family! Come visit, ya’ll! 🌴☀️👒 #SUNSHINEAWAITS #swappingcoasts #charleston.” 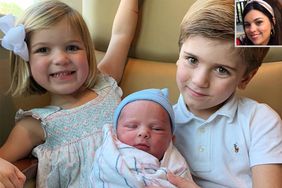