Kylie Jenner has been busy stocking up on fancy baby gear, according to a source

Kylie Jenner — who’s pregnant with her first child, a girl, with boyfriend Travis Scott — has been busy stocking up on fancy baby gear, a source tells PEOPLE.

“Kylie is having a lot of fun picking out items for her baby. She’s definitely leaning towards pink hues and having fun with the fact that she’s having a girl,” the source says.

The mom-to-be’s purchases include plenty of cute clothes and baby gear, including a stroller.

RELATED VIDEO: Kylie Jenner Shows Off 20-Foot Christmas Tree – Is It Inspired by Her Baby’s Sex?

Although Jenner has yet to announce her pregnancy, which multiple sources confirmed to PEOPLE in September, the makeup mogul has appeared to drop some hints at the sex of the baby she’s carrying.

On Thursday, she gave fans a look at her 20-foot Christmas tree, which was covered in giant pink ornaments.

Complete with a backdrop of Marilyn Monroe pop art prints, the tree took up Jenner’s entire entryway. A pink bow emoji in the reality star’s caption might have also been a nod to her little one on the way.

“Thank you @jeffleatham & his team for making my XMAS dreams come true! 20 feet of magic! Even more perfect in real life … 🎀,” she wrote in the caption on social media.

The Keeping Up With the Kardashians star has also previously posted cryptic photos of pink decorations and pink butterfly jewelry. Butterflies have special significance for Jenner and Scott. This summer, the couple got matching ankle butterfly tattoos and one of the rapper’s most popular tracks is “Butterfly Effect.”

Since the news of her pregnancy broke, the mom-to-be has avoided stepping out into the spotlight. While Jenner is very involved in her beauty business, she has no plans to go out in a public capacity until her baby is born.

“Kylie wants to disappear and be out of the spotlight and focus on her health and happiness,” a source close to the family previously told PEOPLE.

“Kylie isn’t going to publicly address her pregnancy until she gives birth. She’s not doing any public appearances and just wanted to take six months off,” the source added. 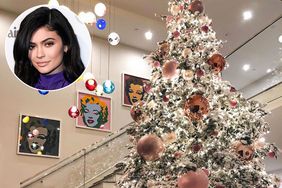 Kylie Jenner Shows Off 20-Foot Christmas Tree – Is It Inspired by Her Baby's Sex? 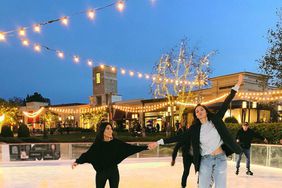 Kylie Jenner 'Has a Favorite Name' for Her Daughter on the Way 'But Isn't Sharing': Source