The family resemblance is strong between Kylie Jenner and her daughter Stormi, who just celebrated her first birthday on Feb. 1

Two peas in a pod!

Kylie Jenner‘s daughter Stormi celebrated her first birthday on Feb. 1 — and she couldn’t have looked more like her mother during her epic party this past Saturday.

Compared to a sweet shot taken from one of the Kylie Cosmetics mogul‘s first bashes, Stormi rocked a red sequined dress and matching sneakers during her over-the-top, amusement-park-themed party. The adorable tot wore her dark hair tied up in a tiny bun as she played in a ball pit, cuddled with over-sized stuffed animals and more.

In the throwback lookalike image, Kylie’s mother Kris Jenner held the birthday girl in her arms while baby Kylie looked directly at the camera, showing off her dark eyes and precious chubby cheeks under a party hat.

“I dreamed about this party and then drew it up on paper room by room and @mindyweiss really made my vision come to life!!!” Kylie wrote on Instagram Sunday, sharing photos from Stormi’s soirée. “Thank you Mindy and team! This party was magical ✨🎡♥️”

Although the Keeping up with the Kardashians star, 21, has spoken in the past about how much Stormi takes after her father Travis Scott, she has also marveled at the striking resemblance between herself and her baby girl.

In October, the proud mama shared an adorable side-by-side shot that showed how she looked almost identical to Stormi as a baby.

In the images, both tykes wore sweet pink outfits while sitting on the ground and gazing up at something in the distance, highlighting their big brown eyes.

“My baby and me,” Kylie wrote alongside one snap, adding three heart-eye emojis.

RELATED VIDEO: Kris Jenner Says Daughter Kylie Jenner is Not Married to Boyfriend Travis Scott — Despite Calling Him Her “Husband”

“Stormi, she’s my twin,” Kylie remarked in July while answering fan questions on YouTube with her best friend Jordyn Woods, later admitting that as her daughter gets older, “She’s looking a lot more like her dad.”

“She has the most perfect lips in the entire world,” the reality star explained, sharing that she’s pretty positive her rapper boyfriend Scott, 26, is responsible.

Continuing, she noted, “She didn’t get those from me. I think her dad has those.” 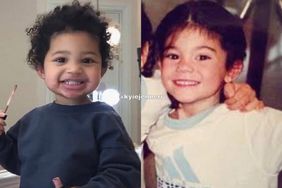 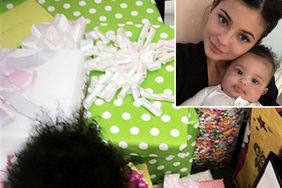 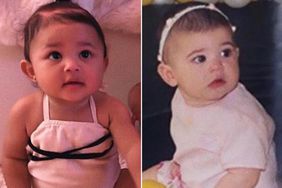 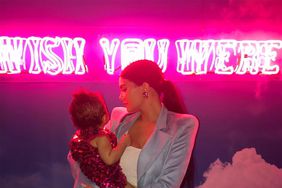 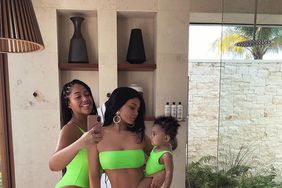