The NASCAR driver and his wife Samantha welcomed their first child, a son, on Monday, May 18, he announced on social media

Kyle Busch is revving up for daddy duty.

The NASCAR driver and his wife Samantha welcomed their first child, a son, on Monday, May 18, he announced on social media.

The couple, who were married in 2010, documented Brexton’s birth on social media, using Twitter and Instagram to make the special announcement.


“Greatest moment of our entire lives! Mommy and Daddy love you so much Brexton Locke Busch!” the new mama, 28, captioned a second black-and-white picture snapped shortly after the birth.

She also shared a precious photo of baby Brexton puckering up for the camera. “This kissy face just melts my heart!” she wrote on Instagram.


After Samantha was diagnosed with polycystic ovarian syndrome (PCOS) and Busch was told his “swimmers weren’t exactly up to par,” the couple turned to in vitro fertilization (IVF) to get pregnant. In October, the couple confirmed they were expecting a baby, but due to Busch’s busy racing schedule, the rising NASCAR star hadn’t anticipated being present for much of his wife’s pregnancy.

Then a violent crash during a Daytona race in February sidelined Busch for most of the season, leaving him with a broken leg and foot, USA Today reported. The horrific accident, however, became a blessing in disguise.


“It stinks to be sitting on the sideline, but to be honest with you, the silver lining is to be home, to be with Samantha and to prep for our son coming. I think that’s been the most fun,” Busch said at an April press conference, according to NASCAR.com.


The first-time father is already back on the racetrack, finishing sixth in last weekend’s NASCAR Sprint All-Star Race. 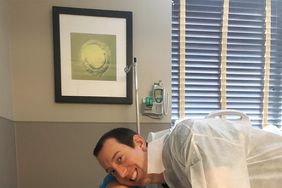