Krysten Ritter revealed her pregnancy shortly before presenting at the Oscars on Feb. 24, showing off her baby bump under a fitted red lace gown

Krysten Ritter‘s little one has arrived!

The Jessica Jones actress, 37, has given birth to her first child, a son, with boyfriend Adam Granduciel, PEOPLE confirms.

TMZ was the first to report the birth.

Ritter announced her pregnancy at the 2019 Oscars in February, showing off her baby bump under a long-sleeved fitted lace gown featuring red floral appliques as she walked the red carpet.

“Surprise!” she captioned a photo set from the event that showed her solo as well as with Granduciel, 40, who is best known as the frontman for The War on Drugs.

Ritter put her baby bump on display for the second time on Instagram in March, wearing a black-and-white polka-dot wiggle dress that highlighted her belly.

“New dress and ready to rock. 😂,” she captioned the snapshot.

Writing over the same image on her Instagram Story, the actress quipped, “New dress who dis.”

The former Breaking Bad actress has kept her social-media followers updated throughout the later stages of her pregnancy, sharing photos of herself in swimsuits and videos of her dog Mikey preparing for the baby.

“Baby gear! I thought for sure Mikey would think this is for him but he seems pretty unfazed (for now) 🤪🤪,” Ritter wrote alongside an April clip of her pup next to a car seat.

Mikey’s opinion about his little human sibling’s mode of transportation was quite a different story, though. Weeks later, the star shared a video of her canine companion enjoying a spin in their baby stroller’s lower storage area.

“Practicing!! Love that Mikey has his own spot to ride along!” Ritter captioned the adorable footage.

Krysten Ritter Is Going to Be a Mom! Actress Debuts Baby Bump on the 2019 Oscars Red Carpet

Ritter celebrated her little one on the way at a baby shower in early June, which was attended by family and friends including the likes of her friend and former costar Mike Colter, who played Luke Cage in season 1 of Jessica Jones.

Fitting given the career of Granduciel (whose real name is Adam Granofsky), the theme of the gathering was all about music, from the décor to the creative desserts — including a record-player-themed cake!

“My best friends threw me a baby shower and my heart is exploding. 🎉,” Ritter captioned a collection of photos from the day. “Thank you thank you @amynadinemakeup @grendola #sissy @laurenbrat @ilariaurbinati (thanks @campoviejousa for the champagne and @cakeandart for possibly the coolest cake I’ve ever seen) (cute maternity dress by @hatchgal and thank you @thealist.us and @louiseetcie for the sensible low heels 😂)” 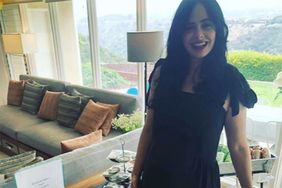 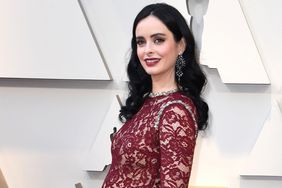 Krysten Ritter Is Going to Be a Mom! Actress Debuts Baby Bump on the 2019 Oscars Red Carpet 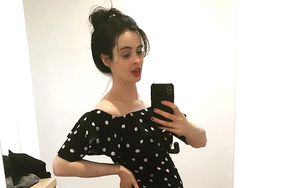