LEAGUE OF HIS OWN

Kingston Rossdale, who turns 5 on May 26, shows his allegiance to the Justice League during a family trip with mom Gwen Stefani and dad Gavin Rossdale to the California Science Museum in L.A. on March 26.

Even under the cloak of face paint, Kingston puts his superpowers – extreme cuteness! – to work while protecting the streets of New York City with dad Gavin on Sept. 6, 2010.

A few days later, the adventurous tot climbs his way to the top of a jungle gym on Sept. 17 during a trip to New York's Central Park.

It's a bird, it's a plane…it's Super-Kingston! Gwen's firstborn slips on a Superman costume for a pal's birthday party June 5, 2010 in Los Angeles.

How's it hanging? Kingston has a swinging good time with mom and dad while strolling down New York's Madison Avenue on Sept. 18, 2010.

Meet the Pirate of the Mediterranean: Kingston looks ready to search for hidden treasure May 14 while aboard a yacht in the South of France, where the Stefani-Rossdales hit town for the Cannes Film Festival.

Safety first! During a family outing, a well-protected Kingston goes on patrol through a West Hollywood park on Nov. 13. 2010.

The same day, the active tyke takes flight on a swing set – with pop Gavin assisting and mom Gwen watching.

Even superboys need new hot wheels! On May 11, a plaid-clad Kingston hops on his scooter while scoping out London's Primrose Hill neighborhood on May 11.

Holy adorable kid, Batman! Kingston looks ready to save the world, sprinting into action during a birthday party on May 8, 2010 in Sherman Oaks, Calif. 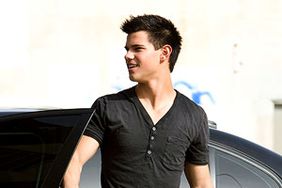