The reality star, husband Kanye West and all four kids posed at the entrance to Stormi Webster's second birthday party

In the snap, Kim, 39, holds up baby Psalm, 9 months, as North, 6, stands in front of her dad with her hand on little sister Chicago, 2. Saint, 4, stands next to his sisters in front of his mom as the family of six pose at the entrance of Stormi World 2, which was a giant blow-up version of the birthday girl’s head.

In another photo, Chicago, dressed in camouflage overalls, looks off into the distance as she holds a snack, while in another, Saint smiles next to a friend while the two boys stand in front of the blue troll.

Another picture shared by the SKIMS founder shows Kanye, 42, Kim and Saint walking into the impressive party, and the last snap in the series showed Chicago enjoying a big ice cream cone.

The Stormi World theme was a nod to the toddler’s dad Travis Scott‘s AstroWorld album. The party featured several of Stormi’s favorite things, including the movies Frozen and Trolls.

“I had to go all out for my baby,” proud mom Kylie Jenner said on Instagram at the time.

In addition to the party, Kylie and Scott took Stormi to Disney World as an early birthday celebration. 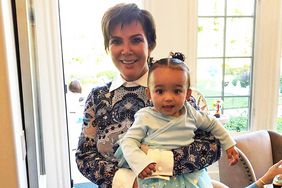