This is the second photo the reality star has shared of her two sons together since welcoming baby Psalm into the world via surrogate on May 9.

Kim Kardashian West shared an adorable new photo of her two sons, 3½-year-old Saint and 9-week-old Psalm, cuddling up in bed on Sunday morning — as requested by big brother Saint.

“Saint asked me to take a pic of him and his brother this morning,” the mother of four, 38, wrote on Instagram. The sweet photo shows Saint holding his baby brother while the pair look at the camera, cuddling in bed in their pajamas.

This is the second photo the Keeping Up with The Kardashians star has shared of her two sons together since she and husband Kanye West welcomed baby Psalm into the world via surrogate on May 9.

In June, Kardashian shared a black-and-white photo of herself holding then-5-week-old Psalm in her arms as Saint leans over him, gently taking the newborn’s face in his hands.

Psalm appeared to be fast asleep in his mom’s arms, wearing a long-sleeved white outfit to match the reality star’s off-the-shoulder top and Saint’s white T-shirt.

The KKW Beauty mogul admired her two sons in the post, captioning it “My boys 🖤🖤.”

And most recently, the reality star shared a close-up shot of her youngest boy, smiling sweetly at the camera, in one of the few photos she has shared of him since his birth.

“I meann my baby Psalm is so sweet!!!” she wrote in the caption of the snap with little Psalm smiling up at the camera as he wears a heather grey outfit. The photo caught the attention of some of Psalm’s aunts and his mom’s celebrity friends.

Kendall Jenner commented, “What it do babbbyyyy.”

It’s no secret that Psalm takes after his 17-month-old sister — the resemblance between the siblings was one of the first things Kim shared about him after he was born in May.

“He’s also Chicago’s twin lol I’m sure he will change a lot but now he looks just like her,” the beauty mogul wrote on Twitter after Psalm was born. 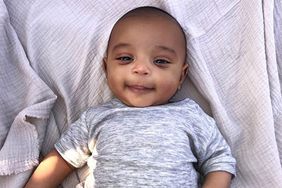 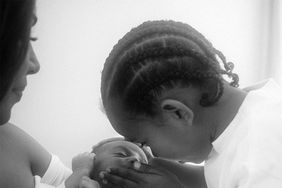 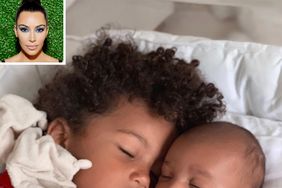 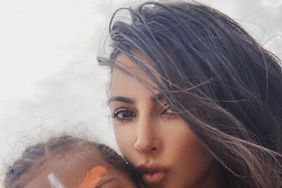