Gang was all there (including the dogs!) for breakfast Wednesday morning at Kanye and Kim Kardashian West's house

Breakfast is a family affair at the Kardashian-West household, and like any family with young kids, things can get a little hectic.

On Wednesday morning, both Kanye and Kim Kardashian West shared a snapshot of their entire brood — daughters Chicago, 2, and North, 6½, plus sons Psalm, 8 months, and Saint, 4 — gathered around a circular wooden table.

Each family member seemed to be invested in a different aspect of the gathering, with West, 42, and his reality-star wife, 39, focusing on what Saint was holding. North, meanwhile, had one of their Pomeranian pups under each arm as she gazed on from behind her parents and brother.

Surprisingly, the only two in the group who were looking at the camera were youngest siblings Psalm and Chicago. And Psalm looked to be the calmest, lying in a baby sleeper in the center of the table as his family buzzed about in the background around their plates of eggs, fruit, sausages and cereal.

“Morning Madness,” Kardashian West captioned her post, on which her sister Khloé Kardashian commented, “This is bliss!!!!!! ❤️❤️❤️❤️❤️”

Kardashian West hasn’t been shy about addressing the photo mishaps that occur with four young children. During a December episode of The Ellen DeGeneres Show, the Keeping Up with the Kardashians star said getting North to pose for their family Christmas card was not a simple task.

“It’s the most anxiety to get four kids together smiling in a room,” Kardashian West told Ellen DeGeneres. “North was having a day, so she refused to be in the shoot. She just was crying because she wanted her specific hairstyle, whatever.”

But the next day, North had a change of heart — one that took some quick thinking and creative photo-editing work to make happen in time for the family card.

“Thank God the photographer was still in town,” the mom of four recalled to DeGeneres, 61. “She said, ‘I just want a photoshoot with just you.’ So I said ‘Perfect,’ I called the photographer, had her come over. I said, ‘I have no makeup on now, I look totally different. Let’s just pretend — shoot us, but cut me out and you’ll Photoshop her in.’ And it looks like a beautiful card.”

Saint and Chicago were recently good sports for their big sister as North tried her hand at being a makeup artist by attempting to recreate the iconic It clown makeup on herself and her younger siblings.

“So North decided to attempt to do make up like the It Clown,” Kardashian West wrote earlier this week over a red background on her Instagram Story.

The KKW Beauty mogul followed up by sharing a series of photos of the adorable results, featuring North’s creative take on the creepy look. She first shared a snap of little Chicago with red makeup around her eyes, nose and mouth — reminiscent of a clown — followed by one of North, who had extra red makeup dripping down her chin and neck.

Their fun family makeover session did, however, end in one casualty — Kardashian West’s cream-colored couch which, to the mother’s dismay, was left with a red streak on it. 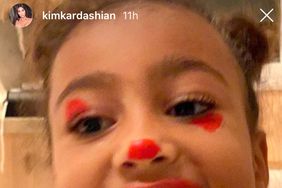