Kiddie Kangaroo: Pockets for your Car Seat or Stroller

I recently tested out the Kiddie Kangaroo – car seat version. It’s basically two pockets (one on each side of your child’s car seat) that can be used for storage for toys, books, snacks, sippy cups and anything else you and your child can think of to put in it. I loved it because while my toddler happily holds his snack trap, I usually have to tuck a toy truck or a sippy cup next to him in his car seat. Inevitably, it falls and then I have a toddler screaming until I can help him.

With the Kiddie Kangaroo, I saw a difference immediately. It was easy to install. Place it on the car seat with the rounded base towards the front. It said to put the center buckle of the car seat through the hole and the pockets on either side of the seat. I found that it worked a little better to not put the buckle through the hole in the Kiddie Kangaroo, and kind of slide it back towards the back of the car seat. Though for safety reasons, I liked that you could secure it that way (but your child’s weight on it will also make sure it does not move). The pockets on the sides of the Kiddie Kangaroo were very accessible for the child (I used a Britax Roundabout with it).

When Ben asked for his snack trap (when we first tested this) which is always filled with some sort of small cheddar crackers, I was able to tell him to get it out of the side pocket. And he did and happily chowed down on his "baby goldfish" crackers. I loved that his Playtex Insulator Cup was safely stowed in the other side pocket (and since each pocket was divided in to two sections, there was plenty of room for a small toy truck or a small book). Now, he still drops things and screams for me to help, but I can remind him that he can reach for a toy or a book until I can help him. It calms him down immediately – now only if it came with a mechanical arm to pick up those dropped items!!!

You can also get the Kiddie Kangaroo for Strollers. Looks perfect for an umbrella stroller that does not have a snack tray. Stick a snack on one side and a drink on the other – your child, like ine, will love the independence.

This product was developed by a mom (I love that!) namedJoya Machabee in Reno, Nevada. According the the Kiddie Kangaroo website, "A new mom, frustrated by the lack of storage for her son’s drink cup, toys or books while traveling, Joya found herself constantly reaching back or stopping the car to retrieve items from the floor."

Get 20% off now, during their web launch! Shop http://www.kiddiekangaroo.com/ 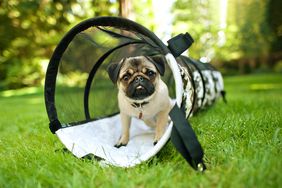 All the Paw-some Items on Your Dog's Summer Wish List

Outside Baby: Get Outside, and Stay There!