In a new interview with Extra, schedueled to air Thursday, Kevin Federline talks about his children. He says that even though he now has his music career, his "children come first." Kevin has his two children with Britney Spears; Sean Preston, 1, and another son (who may or may not be named Sutton Pierce?). Kevin also has two children with ex-girlfriend Shar Jackson; Kori, 4, and Kaleb, 2. Kevin also adds that his wife, Britney Spears’ jaw just "about droppped" when she heard his music, and that the former pop star has been giving him advice.

Photo and story from PEOPLE, with permission

Kevin Federline with Kori and Kaleb 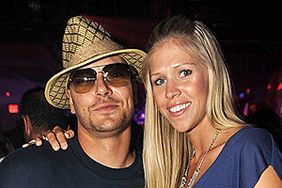