Kevin Richardson - dad to Maxwell Haze, 3½, and Mason, 9½ - wants his sons "to be happy and passionate about whatever it is that they decide to pursue"

Could there be another Backstreet Boy in the making?

Band member Kevin Richardson‘s 3½-year-old son Maxwell Haze may one day be the sixth addition. Not only has the youngster seen his dad perform at one of his “Backstreet Boys: Larger Than Life” shows in Las Vegas, but he’s already singing along to all of the BSB hits.

“My little one actually just put it all together now, so he knows,” Richardson, 45, tells PEOPLE. “He knows the music. He sings the songs.”

“So looking out there and seeing him standing up with his little chin right up on the front of the stage and looking at me, it’s a pretty incredible feeling,” Richardson continues of Maxwell, who was joined by the singer’s older son Mason, 9½, and wife Kristin.

Adds the father of two, “It’s pretty cool to see your son watching and singing along, and jumping up and down and dancing. It’s incredible.”

As for Richardson’s older son, the star admits Mason “is used to” his dad’s fame now. “He definitely knows what I do and what I’ve been doing,” he explains. “Sometimes when he’s at a show, he doesn’t want to seem too affected by it. He wants to play it cool, which is cute. Especially if he’s got some friends there, he wants to be cool [and] laid back.”

But what’s been really “interesting” for the Richardson family is how “much more visible” the Backstreet Boys have been over the last two years.

“Kids at school are really starting to talk to [Mason] about it and know what I do for a living,” says Richardson. “So that’s interesting to navigate and to discuss and to talk about with him because I want him to have the most normal upbringing as possible.”

He continues, “So that’s been a new, interesting dynamic into the family as of late.”

When it comes to his boys following in his entertainment footsteps, Richardson says that his oldest “loves technology.”

“He says he wants to work for Microsoft,” shares the “I Want it That Way” singer. “But he loves music. He’s got great rhythm. He loves dance. He actually just started School of Rock [and] he’s playing drums.”

And Maxwell? “I think he’s got the bug,” says the proud dad. “I think he’s going to want to be an entertainer. He’s definitely [into] music, singing all the time [and] wants me to watch him dance and sing.”

Adds Richardson, “He seems more passionate about it than my oldest was at his age, so hey, you never know. And if that’s something that they want to do, then of course I will encourage them and support them and help them.”

“But I just want them to be happy and passionate about whatever it is that they decide to pursue in their life,” he admits. 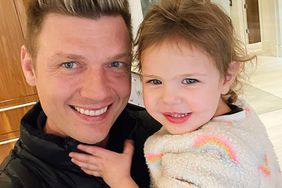