Update: Julianna’s parents confirm to People and Us Weekly that the couple welcomed a son, named Kieran Lindsay Lieberthal. The Star Ledger reports that he arrived on Thursday, January 17th. Her dad reveals,

Obviously I’m utterly delighted to be a grandfather. I have to say, he is cuter than any other baby I’ve seen. He’s brought a lot of joy to the family. He has some of Keith’s features and some of Julianna’s features and they’re changing everyday.

On the topic of having more children, Paul Margulies replied,

I have noidea. At one point she didn’t think she was going to have any children,and that’s why this one they’re overjoyed with.

Julianna’s mother, however, was coy when asked, saying,

I better not open my mouth. I don’t want to get in trouble with my daughter.

Despite this, her voicemail message announces,

A beautiful baby boy has been born to us. All is well. His name is Kieran Lindsay Lieberthal. Is that poetry? Do a little dance. Love this day! All is well. God bless! Can’t wait to hear from you.

CBB Exclusive originally posted 3 pm: Actress Julianna Margulies, 41, and her husband Keith Lieberthal are new parents after welcoming their baby, Julianna’s rep confirms first to CBB. The sex of the child and birth details are not being released at this time.

The pregnancy was announced in August. The former ER and Sopranos star tied the knot with Keith in November.

Thanks to CBB reader Kitty for the birthdate. 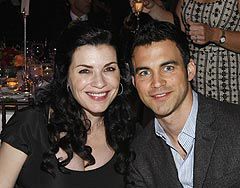