Josh Duhamel Poses Shirtless During Lake Day with His Son Axl: 'Nothing Better'

Josh Duhamel and his son Axl Jack are having some fun in the sun this summer.

Duhamel, 45, posted pictures of his day at the lake with Axl, 4, and his extended family on Instagram over the weekend.

“Nothing better than time at the lake with my sisters and the kids,” Duhamel wrote.

In one shot, Duhamel posed shirtless in the water alongside his sisters, Axl, and three other children. In other pictures from the same Instagram gallery, the family went on a walk through nature and played by the lake.

Duhamel may share a love of the lake with his son — who celebrates his fifth birthday this month — but they differ on their preferences for sports teams.

“He is 4, and he already likes to pretend that he likes the [Green Bay] Packers,” Duhamel told PEOPLE at a screening of Love, Simon in March. “That is, like… the biggest sin that you can have in our house.”

Josh Duhamel Uses M&Ms to Teach His Son Axl Tee-Ball: I Might ‘Have a Kid with Diabetes’

Duhamel continued, “We are Vikings fans, and he already likes to say, ‘Go, Packers!’ and I know it’s just to piss me off, and he is 4!”

In June 2017, Duhamel spilled to PEOPLE that he hopes to coach Axl on a sports team one day. “I’m totally going to be that dad,” Duhamel said. “I’ll be the dad on the sidelines coaching.”

RELATED VIDEO: Fergie & Josh Duhamel’s Differences Were ‘A Factor’ in Split: ‘This Has Been a Long Time Coming’

Duhamel shares Axl with ex Fergie, 43. The couple announced their split in September 2017 after eight years of marriage.

The next month, the singer discussed the duo’s co-parenting approach on The Talk. “We’re making it work,” she said at the time. “We’re both working full time right now. We are just making it happen. We’ve got Axl, and we’re just working parents.”

Duhamel recently dated Eiza Gonzalez, 28, for a few months before breaking up in July. A source told PEOPLE, “Their work schedules were tough on the relationship.” 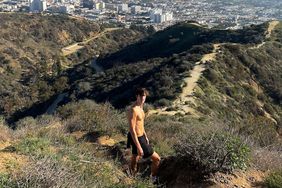