Josh Duhamel: Fergie and I Are 'So Much Wiser' Now

"We're completely happy. We're much wiser than we were 10 years ago. We're much more ready. I think we're so strong as a couple and I think that all of those things are really important when you bring a little one into the world," he says.

Is a boy on the way for Josh Duhamel and Fergie?

The expectant couple haven’t announced their baby’s sex, but Duhamel referred to a boy when discussing childproofing their home.

Duhamel was discussing impending fatherhood in an interview to promote his role as host of Saturday’s Kids’ Choice Awards in Los Angeles.

Fergie, 37, just announced her pregnancy in February — though the couple have fielded questions about when they’d have children since even before they married in 2009. Duhamel now says that the time is right.

“Now I get to relive my youth through my child and see my child live all that. So everybody’s got a different path,” Duhamel explains. “I wouldn’t change anything. We’re completely happy. We’re much wiser than we were 10 years ago. We’re much more ready. I think we’re so strong as a couple and all of those things are really important when you bring a little one into the world.”

The actor says he’s gotten plenty of advice from friends and family about parenthood, and has experience dealing with babies at home because he has two much younger sisters.

“I’ve just picked a lot up along the way. Whether it’s giving them structure at an early age to — when they wake up in the middle of the night, you don’t cuddle them or get their attention. You just feed them and put them right back.”

Duhamel has already been able to give parenting advice to Fergie.

“You know, I was telling my wife yesterday … she didn’t know that you can bathe kids in a sink when they’re newborn. That’s where you bathe them, in a sink, because they’re so little. She’s like, ‘Really?!'” he jokes.

Meanwhile, the couple hasn’t yet started putting together a nursery or doing other household preparations.

“I’m realizing how much work we’re going to have to do to childproof our place. Or move. We’re not sure yet,” he notes. “You start thinking about those things. You really do — things that I’ve never thought about before.”

Josh Duhamel: I Plan to Get Fergie a Push Present 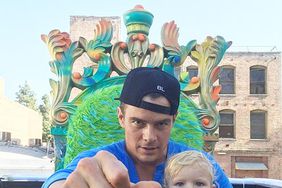 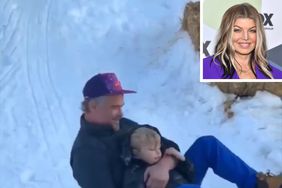 Sledding in a Winter Wonderland! Fergie and Josh Duhamel Play with Their Son Axl in the 'Snow'