Questions of ‘who am I?’ are normal for adults, but Jennifer Garner revealed during a Thursday visit to Good Morning America that her 3-year-old daughter Violet Anne has experienced an identity crisis of her own. “She asked me, ‘Am I a baby? Am I grown up? Am I a mermaid? Am I a human being?” Jennifer, 37, recalled with a laugh. “[She said], ‘I don’t know who or what I am!'”

The appearance was in promotion of Jennifer’s new movie Ghosts of Girlfriends Past, which co-stars Matthew McConaughey. During the shoot, Matthew’s partner Camila Alves was often on the set. “She was the most beautiful pregnant woman you’ll ever see,” Jennifer raved. Matthew, meanwhile, used to enjoy ribbing Jennifer on all the sleep he was enjoying before his baby — Levi, 9 ½-months — had arrived. “Matthew would just calmly, every night, get 10 hours of sleep,” Jennifer exclaimed. “No parent in this world gets 10 hours of sleep a night.” GMA then cut away to a clip from Matthew’s appearance on Wednesday’s show, where he made it abundantly clear that he’s still very well rested!

“[The lack of sleep] is something that you ladies, you women and mothers have in you that I don’t think us fathers do, and we thank you for it. Because I need my eight hours.”

During a Wednesday stop by Late Night with David Letterman, Jennifer observed that life with baby no. 2 — Seraphina Rose Elizabeth, 3 ½-months — is much different than life with baby no. 1. “Oh, if we could all just be second time parents the first time around,” she said. “It’s so much easier.”

“The baby’s so happy, she’s so easy, she’s not like, ‘What? Why are you looking at me? Why are you stressing me out?’ You just forget about them. You think, ‘Oh, we’ve got another kid. Right. Did we leave it in the car?'”

Click below to read about Jennifer’s sleep-deprived trips to the grocery store and to watch Letterman.

Husband Ben Affleck is also benefiting from the ‘two kids’ learning curve. “When Violet was a baby he was so careful and delicate,” Jennifer joked. “But now with our second he’s just, like, flinging her around…he’s got her by her foot.” He’s also enjoying all the additional one-on-one time with the new big sister. “He’s first in charge of Violet,” Jennifer revealed. “He likes that, because now he’s kind of moved up.” Although Violet has at times displayed some anxiety over no longer being the baby of the family — “sometimes she’s, like, ‘put her down,'” Jennifer said — she has, for the most part, transitioned with ease.

“She’s really, really been a champ about it. Really sweet.”

Jennifer also told the audience how integral Violet was in naming her baby sister. “Violet, ever since she figured out that I was pregnant, said ‘Oh, that’s Sarah.’ We didn’t know if it was a boy or a girl, and we were like, ‘Oh, we’ll see,'” Jennifer explained. “We don’t know where she came up with it, but she said ‘Sarah’ consistently the whole time.”

“We kept saying, ‘Well she’s not going to name the kid.’ I mean, she’s a baby and we’ll decide [on a name]. We’ll figure it out…But [when Seraphina was born] she was really angelic and we were thinking of angel kinds of names; A week into it we still hadn’t decided, so we just went with what Violet wanted…Seraphina means little angel, and it means angel in every language.”

While she is more relaxed the second time around, the workload for mom is obviously doubled. “It’s crazy,” Jennifer says, adding “it’s like having ten kids.”

“You have one and you think you start to know what you’re doing and it’s under control, and then you have the other one and it all goes to hell in a hand basket.”

As someone who always prided herself on her ability to get by on very little sleep, Jennifer says that she recently learned that she’s not doing nearly as good of a job at it as she thought she was! “What I’ve realized is that I’m good at faking it,” she joked. “Because I’ll just be going along and then I find myself at the grocery store [zoning out] and the lady at the checkout is going, ‘Are you going to pay for this? Is there something you wanted to say to me, or ask me for?'” She adds,

“I don’t know why they call it ‘nights’ though. People will ask, ‘How was the baby last night?’ I say, what is ‘night’? It just means I put on sweatpants and took a couple of naps…It’s a disaster.”

Ghosts of Girlfriends Past opens Friday. 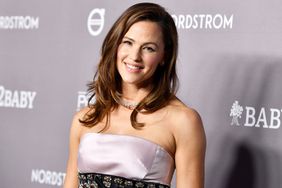 Jennifer Garner on Her Body Transformation Since Having Kids: I 'Look Like a Woman Who's Had 3 Babies'

Jennifer Garner: 'I Have It Easier Than Most' Working Moms

Jennifer Garner Is 'Kind of Panicked' About Daughter Violet Having a Laptop: She's Not on Social Media 'But I Know It's Coming' 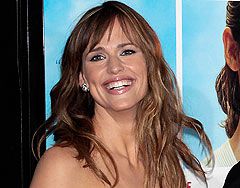 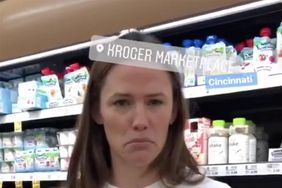