For more from Jenna Bush Hager and Barbara Pierce Bush, pick up the latest issue of PEOPLE, on newsstands now

When your sister is invited into your kids’ club and you’re not, you know they’ve found a friend for life.

“Barbara [Pierce Bush] and my kids formed a glitter club, which I’m not part of because they think that I am going to be offended by the mess,” Jenna Bush Hager tells PEOPLE of her twin sister’s relationship with her two daughters Poppy Louise, 4, and Margaret “Mila” Laura, 6½.

“[Jenna] would prefer we be as clean as possible, but I think the role of aunt is to ignore that and have as much fun as possible,” Barbara jokes to PEOPLE of her “very exclusive club” with the girls. “So I bring candy, we make cookies with icing and sprinkles and we make glitter slime — and then I leave!”

“I’m the one that has to clean up the glitter mess,” Jenna laments, saying her preference for the messier crafts is that they be outdoors rather than inside. “I’m the glitter cleaner, which is not a fun thing to be.”

Jenna and Barbara, 38, are on the same page when it comes to their family expansion — meaning they each have their own individual ideas of what that looks like in their respective households.

The Today show star says that while her daughters are “dying” to get a little cousin from Barbara and her husband Craig Coyne, she’s “not trying to put pressure on” her sister, even though Barbara “wants children soon.”

“My mom always says people get their babies when they’re supposed to,” Bush Hager adds.

Barbara recently moved from four blocks away from Jenna in New York City to Cambridge, Massachusetts, where she’s attending Harvard University for her master’s degree.

But she’ll only be there for a year, and as she tells PEOPLE, it was “so nice” being able to see her nieces “all the time” when she lived in N.Y.C. (She also recently because an aunt to Jenna’s son Henry “Hal” Harold, 3 months.)

“When Mila was little, I started taking her on dates with me. So we went to a cat café in New York. That was our first date because she doesn’t have a cat, but she loves cats,” Barbara shares. “We went to the Meow Parlour and hung out with all these cats and ate muffins, and we still go on crafting dates to different fun places in New York.”

“Poppy comes now that she’s old enough to join us for our little daytime activities,” the proud aunt adds. 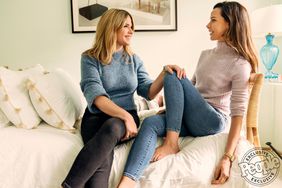