Jenna Bush, 26, will be tying the knot with her fiancé Henry Hager, 29, in a private ceremony held at President Bush’s gated 1,600 acre ranch in Crawford, Texas on May 10. A source told People that it will be a small wedding adding:

First Lady Laura Bush had originally though the wedding might be held at the White House, saying it ‘would be a lot of fun’ but later explained to People:

But I also know it wouldn’t be very private. And of course we want to do what Jenna wants to do.

Henry is a MBA student at Virginia’s Darden School completing his final year. He was previously a staff member of the Commerce Department. When it came time to propose to Jenna, he first spoke with her twin sister, Barbara, about his intentions. Laura said:

That was really sweet, because they have such a close relationship, Barbara and Jenna do.

Henry then asked the president and first lady for Jenna’s hand in marriage during a visit to the president’s cabin at Camp David. They all kept the proposal a secret from Jenna until Henry proposed on August 15. President Bush said:

I am thrilled for Henry and Jenna, knowing how great marriage can be. 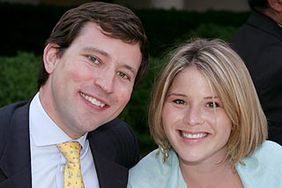