"We're so excited to share the wonderful news of the birth of our son, Charlie Ocean Goldblum, born on the 4th of July," the actor writes

Jeff Goldblum is a dad!

The actor is a first-time father after welcoming a baby boy with wife Emilie Livingston Goldblum, he announced Tuesday on his Facebook page.

“We’re so excited to share the wonderful news of the birth of our son, Charlie Ocean Goldblum, born on the 4th of July. Independence Day,” Goldblum, who’s currently in production for Independence Day: Resurgence, wrote.


Goldblum, 62, first revealed he was going to be a dad during a January appearance on The Late Show with David Letterman.

“It’s a boy. We picked out a name, as a matter of fact,” the Portlandia star shared. “If it stays — this is our current thinking — [it’ll be] Elliott Charlie.”

(Looks like they decided to stick with one of the two!)

In February, the couple stepped out for the Oscars, where the contortionist and aerialist, 32, kept her baby belly under wraps in a black and cream-colored gown.

The Goldblums were married last November in Los Angeles.

Baby Boy on the Way for Jeff Goldblum 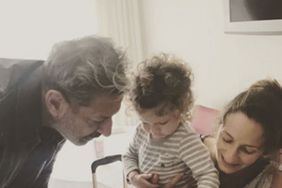