"It's easy for us, as human beings, to want our children to do certain things, but we have no idea. We're just guides," the multi-hyphenate, 51, told The Sunday Times

There's no doubt that JAY-Z and Beyoncé have bestowed quite the legacy onto their children.

But, if there's one thing JAY-Z wants for Blue Ivy, 9, and her twin siblings — Sir and Rumi, who turn 4 in June — it's for them to feel supported enough to embark on their own ventures.

"Feeling loved is the most important thing a child needs, you know?" the multi-hyphenate, 51, said during rare an interview with The Sunday Times, pegged to his upcoming Only See Great campaign with Puma.

"Not 'Here's this business that I'm going to hand over to you, that I'm creating for you.' What if my child doesn't want to be in music or sports?" he continued. "I have no idea, right? But as long as your child feels supported, and feels loved, I think anything is possible."

Especially over the past year, spending more time at home and surrounded by family during the COVID-19 pandemic, JAY-Z told the publications he's learned family "is your foundation."

JAY-Z Sells Half of Ace of Spades Ownership to LVMH

He added that, for now, his priority is to "just make sure we provide a loving environment, be very attentive to who they want to be."

"It's easy for us, as human beings, to want our children to do certain things, but we have no idea," he said. "We're just guides."

As for his own legacy? "I have no idea," JAY-Z, who in February received a nomination for potential induction into the Rock & Roll Hall of Fame, told The Sunday Times.

"I'm not beyond ego, right? Hopefully they speak of me [with] the names of Bob Marley and all the greats. But that's not for me to say," he said, adding that he is "most proud of overcoming my circumstances and providing opportunity for people who look like me and who came from the same situation that I've come from."

The mega mogul likened his career — and his hopes for the future careers of Blue, Sir, and Rumi — to blackjack. 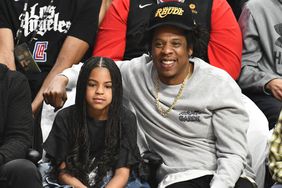