Kristin Cavallari has a lot to be thankful for this holiday season.

The former reality star and her husband, Chicago Bears quarterback Jay Cutler, welcomed their third child on Monday, Nov. 23. She weighed in at 7 lbs., 6 oz. and measured 19¼ inches long.

The new addition to the family joins older brothers Jaxon Wyatt, 18 months, and Camden Jack, 3. Her arrival also means the designer is no longer the only lady in the house.

“She’s going to steal Jay’s heart, which will in turn melt mine!” Cavallari, 28, said recently. “I’m excited for the boys to grow up with a sister. I think it will help them to better understand and respect women.”

The couple, who’ve had their daughter’s name chosen for years, drew their inspiration from an unexpected place.

“We picked out this baby girl’s name when I was pregnant with our first,” Cavallari said in September. “I met a woman and her dog, and I loved her dog’s name. Funny enough, it was the name she had picked out if she had a girl, but she had boys, so she used it for her dog instead.”

The new mom, whose book Balancing in Heels will be out in March, has been counting down the days to delivery, sharing snaps on her Instagram along the way. In one photo, a bowl of ice cream rests near her belly while Cutler, 32, gives his wife a foot massage in another.

“Let’s see if these trigger points really work,” she captioned the photo.

In another photo, Cavallari’s bump is on full display as she makes a heart with her hands over her belly.

“Any day now…” she captioned the sweet snap.

Cavallari and Cutler made their pregnancy announcement in May through her official app.

“We’re at it again! Thrilled to announce baby number 3 is on the way! The Cutler crew keeps on growin!” she wrote alongside a photo of her making a heart over her belly.

Just two months later, the couple shared that they were expecting a girl — the first for the pair.

“The boys are so excited to have a little sister on the way!” Cavallari captioned a black-and-white photo featuring a pair of pink Converse.

Baby Girl on the Way for Jay Cutler and Kristin Cavallari

Kristin Cavallari Does Double Duty, Pumping Breast Milk While Lounging by the Pool 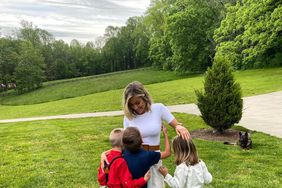 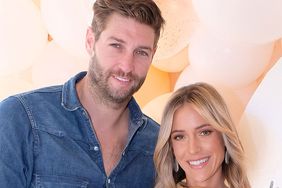