The celebrity chef welcomed his fifth child with wife Jools

Jamie Oliver has to be feeling lucky — he now has a household of seven!

The British chef and television personality and his wife Jools have welcomed their fifth child, a son, he announced Monday on Twitter.

“And then this just happened guys!! It’s a baby boy! Everyone in the Oliver family is very surprised and beyond happy,” Oliver, 41, tweeted along with a photo of hew newborn.

Jools shared a sweet shot of her baby boy breastfeeding on Instagram, writing, “Little baby boy Oliver has arrived. We are so very happy, blessed, grateful and totally in love all over again and so very proud of our two eldest daughters who cut the cord. Jamie was my hero … no name yet)!”

Oliver’s rep confirmed the couple’s happy expecting news to PEOPLE in March, just hours before they made an appearance in London that featured Jools’ baby bump on full display.

On July 13, the chef and now-dad-of-five posted a photo of his wife, 41, standing in their new son’s nursery.

“[Two] weeks to go,” Oliver wrote next to the photo, in which Jools’ baby belly looks almost ready to pop. “Nervous but very excited.”

Although they have not released their son’s name, it’s likely the new mom of five will have the final say when it comes to deciding on his moniker.

“Jools is definitely in charge of the names, and we’re probably quite lucky it was a boy really, because we were out of names [for] girls,” Oliver said in 2010 shortly after Buddy’s birth.

Jamie Oliver and Wife Jools Announce They're Expecting Fifth Child — and Then Hit the Red Carpet! 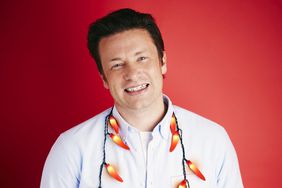 Jamie Oliver on His Daughters Watching Their Brother Being Born: 'It's Only Controversial to Really Strange People' 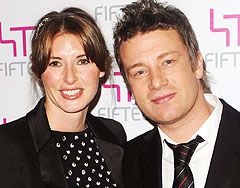