Update:
Jaime tells Us Weekly that she learned she was pregnant on September 8th. She and her then boyfriend Eric (now fiance) had been trying to conceive for a while so she took NINE pregnancy tests to be certain.

Also, they already have a name picked out!

Tune in tonight to the Tonight Show when My Name is Earl star Jaime Pressly admits that she is in fact pregnant! On this evening’s (pre-recorded), she’ll tell Jay Leno that she is four months pregnant with her first child with fiance DJ Eric Cubiche. (Eric is Cuban-American. Jaime said "Cubiche" is Cuban for "homey.") The couple, who have been friends for 9 years and dated on and off, hasn’t set a date for their wedding yet and Jaime says, "I’m not even thinking of planning a wedding right now."

You can tell that she’s definitely got a bump. She explained to Jay, "I’m at that point now where I’m showing enough to where I can’t really fit in the same clothes anymore but I kind of can. So people are seeing a little gut stick and I’ve always been a fitness freak. I’m pregnant and I can let my gut hang out now. I’m eating, I just had a Big Mac backstage!" Additionally she says that her breasts have gotten bigger, "the biggest problem is trying to fit these puppies into a dress."

Rumors were swirling in September and October that she was pregnant and her co-star Jason Lee told E!, "She’s gonna be a good wife. She’s a hard-core southern chick. She says it like it is. But with that also comes a real sense of family, and she’s gonna be a great mom." So when People magazine, CBS ShowBuzz and everyone asked, she told them she was most certainly not pregnant. Jaime admitted, "I lied and lied and lied!" She says that she did tell Jason privately, but "I was only a month pregnant so I lied [to the press], which is a woman’s right."

She’s been experiencing hormonal swings, as can be expected. "I live off Tylenol now. I wish Tylenol made a ‘pregnancy syndrome.’ The mood swings you can’t do anything about. You turn into a sailor. You want to stab people and you don’t know why! Luckily though I’m past the first trimester because it’s the first trimester that’s so difficult. I’m still tired. You wake up sleepy and the nausea is loads of fun." But, "I’m healthy, the baby’s healthy, we’re good."

Jay asked her if she was going to be a strict mom. Jaime said she’ll raise polite kids. "I’m very open-minded and encourage open-mindedness and individuality but at the same time my child, different as it may be here in this town, but they’ll be saying ‘yes sir’ and ‘no sir’."

Jaime says she will find out the sex for sure on Monday when she will go for the 3D ultrasound, but one doctor thinks it’s a boy from her first ultrasound. "She asked me what I thought it was having and I said a boy…She looked at the picture and said, ‘If that’s not a boy, that’s a third leg.’ Of course, Eric says ‘it’s because he’s Cuban.’" Her other doctor thought it was "probably his finger."

One thing’s for sure- they won’t be writing the pregnancy into Our Name is Earl. They’ll hide her belly a la Austin Powers "where you hide behind stuff but that kind of makes it funny." She said it’s too early in the show to bring a baby into the show.

Jaime Pressly on the Tonight Show with Jay Leno 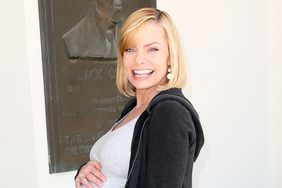