Although some women dread turning 30, Jaime Pressly says she was ready. With a clothing line, a hit television show in My Name is Earl (her role on which has since earned her an Emmy award), a fiance and a new baby, Jaime had good reason to be excited — and good reason to feel exhausted.

I wasn’t afraid to turn 30, I was excited. It makes you feel like a new woman and a woman in general. It makes people take you more seriously. Same thing happens when you have a child. On the other hand, the lack of sleep — the jobs, my son, that kind of thing — makes you feel old.

Even with all that she has going on, the actress says she does intend to stop "and smell the roses" someday soon, even if it’s not right now.

I think you stop and slow down and be a mom full-time and be able to appreciate all the hard work you did. And not the money you made, but the things that came along with the success. When you’re busy working, you don’t stop and smell the roses, right? When you become a machine, you go do your job and be a mom and then you go to work and then you go to bed and do it all over again.

There comes a point in time when you pull a Demi, when you move outside of the spotlight and live your life away from it. You appreciate the things you worked so hard for. But you have to get to that point.

Dezi James — turning 6-months-old on Sunday — is the first child for Jaime and her fiance, DJ Eric Cubiche. 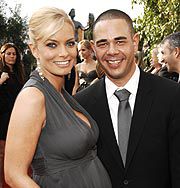 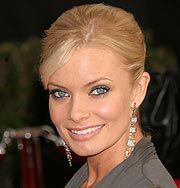