"If I'm open about it, hopefully it won't be so taboo to talk about it," she tells PEOPLE.

Jaime King speaks out about her painful fertility struggle and her journey from wild child to doting mom. Subscribe now to get instant access to her candid interview in this issue of PEOPLE.

Now, she’s putting it all out there in hopes to support other women and encourage those who are going through a similar struggle, to start the conversation and talk with one another.

“I was hiding what I was going through for so long, and I hear about so many women going through what I went through. If I’m open about it, hopefully it won’t be so taboo to talk about it,” she told PEOPLE exclusively during a recent interview at her Beverly Hills home.

After seeing many physicians, she met Dr. Randy Harris, an obstetrician-gynecologist, who diagnosed her with polycystic ovarian syndrome, a condition that affects female sex hormones and fertility, as well as endometriosis.

Finally, after five miscarriages, five rounds of in vitro fertilization (IVF) and 26 rounds of intrauterine insemination (IUI), good luck brought the Hart of Dixie star a bit of unexpected news: She had naturally conceived her first child with husband Kyle Newman.

“When I got pregnant it was the best thing in the whole world. I had never felt so grateful, happy and elated,” King tells PEOPLE.

After a difficult pregnancy and 26 grueling hours of labor, the actress and model gave birth to son James Knight in October 2013. While she and her new son were able to bond through breastfeeding, King admits she didn’t have that “angels singing moment” that so many women dream of and it took some time to adjust to motherhood.

Making matters more difficult, King, 35, says she was asked to return to set on Hart of Dixie just two weeks after giving birth, but ultimately returned after six weeks, still exhausted, struggling to find her balance and suffering from postpartum depression.

“The baby was with me, but my husband was gone [on set]. I was basically by myself. Having to go back to work was very traumatic because I was still breastfeeding and up every two hours. I felt this major pressure,” she explains.

Now blissfully in love with her 15-month-old son, and like most mothers, just taking things day by day to figure it out, she’s still hoping to expand her family. “I don’t know what the future holds,” she says. “All I know is I can’t control it, and I’m okay with that.”

For more on Jaime King’s struggle with infertility and her new life as a mom, pick up the latest issue of PEOPLE, on newsstands Friday. 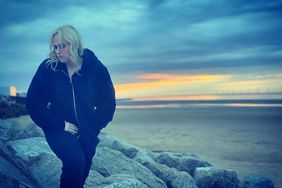