"With love we welcome our son, Joseph Frederick Kushner," she Tweeted.

Ivanka Trump and her husband, New York Observer owner Jared Kushner, welcomed their second child on Monday, Oct. 14 at 9:54 p.m., she announced on Twitter on Tuesday.

“We just welcomed a beautiful & healthy son into the world. Jared, Arabella and I couldn’t be happier!” the businesswoman, 31, Tweeted.

Later in the day, Trump introduced her bundle of joy on Tumblr Tuesday, sharing a photo cradling her swaddled son in the hospital and revealing his name.

“With love we welcome our son, Joseph Frederick Kushner,” she Tweeted.

Baby boy — who shares a middle name with his cousin Spencer Frederick, the youngest son of Trump’s brother Donald Jr. — was named after both his parents’ paternal grandfathers.

“Jared’s grandfather, Joseph, was a rock. His indomitable spirit, his sense of family, and his work ethic are the values we hope to hand down to our son,” Trump writes.

“My grandfather, Frederick, was a builder not just of tens of thousands of homes throughout this city, but of a tight-knit family that honors to this day the traditions he established. Both men set the standards that have been passed down through the generations and which we hope to impart upon Joseph and Arabella.”

She adds, “We are honored to name our son after these two distinguished men. We feel so blessed with the newest member of the family!”

“Arabella is at home with her grandmother practicing her swaddle before her little brother comes home!” Trump Tweeted, sharing a snapshot of the 2-year-old cuddling her bundled up baby doll. Later, a photo of the toddler holding her new baby brother was posted.

While the proud new parents found out the sex of their second child prior to his arrival, the real estate mogul had kept it a secret due to her superstitions.

“I don’t like to tell people, but I don’t have the discipline to keep it a surprise,” she told Fit Pregnancy.

But Trump — who announced her pregnancy in April — wasn’t the only one looking forward to the family’s newest addition; Arabella was anxiously awaiting being a big sister.

“She’s really excited and borderline impatient at this point because I started talking about it around six to seven months and she hasn’t waited that long for anything in her life,” Trump joked to PEOPLE in September.

“So she asks me now, every morning, [if the baby’s coming]. I think she’s starting to mistrust me in the sense that her sibling is actually going to be arriving.” 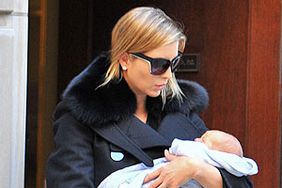 Ivanka Trump Leaves the Hospital in Style with Baby Joseph

Too Cute! Ivanka Trump Shares Photo of Husband and Daughter with Theodore as Grandma Ivana Poses with Newborn

Ivanka Trump on How Fast Son Theo Is Growing: 'Can You Believe It?!'