Lipstick Jungle actress Kim Raver, 38, welcomed Leo Kipling on October 9th, and introduces her now 3-month-old son in the latest issue of People. Kim didn’t have much of a maternity leave — she was back on set four weeks after the birth, struggling to fit into her character’s sample-size wardrobe. (She didn’t.) Close friend and co-star Brooke Shields gave her a little perspective on the situation, however.

She said, ‘Honey, there will be a lifetime of getting back to your normal size. Now you’re nursing for his life. So I might not be back in my skinny jeans, but who cares?

Rowan and Luke get along really well. Rowan shows Luke the ropes because she’s already a big sister [to Grier, 20 months].

The former 24 star, who relocated to NYC for her new series, says she’s realizing how ‘kid-friendly‘ the Big Apple can be.

[Luke took dinosaur classes at the Museum of Natural History.] He was so into me being in ‘Night at the Museum.’

According to Kim, the addition of Leo may not be the last the family sees — she and Manu are considering having a third child, but need to think it over more when they’re clearer-headed.

When I was in the delivery room, and they handed me Leo, I was like, ‘This is so beautiful; I want another one!’ Then it hits you — you’re completely sleep-deprived. So we’ll see.

For now, Kim is feeling blessed — Leo is a good eater and a good sleeper. However, she’s doing some things differently during her second go at motherhood.

[I nurse Leo whenever he’s up instead of keeping him on a strict schedule and waking him to feed.] Leo’s an amazing sleeper, but it’s because we’re calmer. 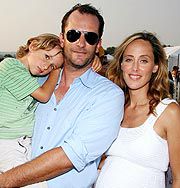 Kim Raver Gets Back Her Pre-Baby Figure

Kim Raver on Putting Herself (and Baby!) First

Kim Raver: What every new mom must know