Charlie Sheen's youngest daughter, who just turned 6 on June 1, keeps mom Denise Richards on her toes while the two enjoy a beachside jog at the OneampOnly Ocean Club in the Bahamas on April 5.

Proving they're never too old for hugs, Michael (who turns 14 on June 2) and Lola (who's 10 on June 16) have a close encounter with beaming mom Kelly Ripa while out in New York City in June 2010.

Jessica Alba's almost 3-year-old (June 7) – and soon-to-be big sis! – gets into the swing of things at a Beverly Hills playground on March 11.

Look who's getting ready for an Indian summer! A yellow-clad Stella (she'll be 3 on June 9) shows off her henna tattoos alongside mom Tori Spelling while filming an episode of Tori amp Dean: sTORIbook Weddings on May 2 in Los Angeles.

Hold on! Funnyman Jack Black keeps a firm grip on his giggly boy, who turns 5 on June 10, at the Milk + Bookies Story Time Celebration in Los Angeles on March 20.

I'm with Coco! The casually chic 7-year-old (June 13) stays stylishly in step with mom Courteney Cox (who's celebrating her 47th birthday two days later), as they make their way through JFK on April 14.

Tiffani Thiessen's – who celebrates her first birthday on June 15 – shares a sweet smile with mom on the set of USA network's White Collar in New York City on March 21.

Family ties run deep for Jamie Lynn Spears, who totes her look-alike tot (who turns 3 on June 19) and keeps nephew Jayden, 4½, close while hanging out at a Los Angeles park on May 2. 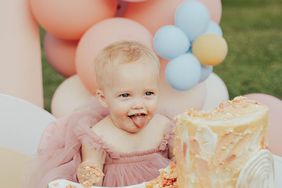 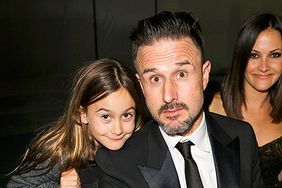