"I know the feeling of it not happening for a long time and I feel like sometimes if it's meant to happen, it will," Hoda Kotb said on Today Tuesday

Hoda Kotb could not be more thankful to be a mother of two — but she’s still getting used to the term!

The Today co-host called in to the show on Tuesday morning to spill the news that she had welcomed her second child, daughter Hope Catherine, via adoption, and phoned in once more later in the show to dish on a few more details about life since she, boyfriend Joel Schiffman and 2-year-old daughter Haley Joy became a family of four.

“I’m standing in the middle of my living room right now. [Hope]’s sleeping in the bassinet right here next to me and I keep looking, like, ‘She’s right there! She’s wrapped up like a baby burrito, she’s here!’ It’s the coolest thing ever.”

Everything New Mom of Two Hoda Kotb Has Said About Adoption — Including the Hints She Was Doing It Again!

Kotb also went into more detail about choosing Hope’s moniker, explaining, “The name came because I think there are a lot of women out there who are hoping that their day is coming too.”

“I know the feeling of it not happening for a long time and I feel like sometimes if it’s meant to happen, it will,” she said. “They told me, at the adoption agency, to wait wisely. They said, ‘Don’t count the days, don’t wonder’ — and trust me, I feel like I’m overflowing with goodness.”

“[Joel and I] had already thought of a name … and ‘Hope’ is in my journal about 10 million times as I was writing for her,” Kotb continued. “Catherine is my best friend [Karen]’s daughter’s name. It just so happens this weekend — when [Hope] was born, when we got her — it was also John’s birthday, my best friend’s husband who passed, and they said that they promised him that they would come to New York and go to Yankee Stadium to a baseball game for him on his first birthday in heaven.”

“And so it was a very emotional time for all of us and I said to Catherine, I said, ‘You’re the strongest kid I know.’ So I wanted to name her after Catherine,” the journalist added, audibly emotional as Savannah Guthrie and Jenna Bush Hager pulled down tissues from a suspended box above their desk.

Kotb doesn’t have to worry about things going awry at work while she’s on maternity leave even though Bush Hager, 37, just made her debut alongside the new mom of two as co-host of Today‘s 10 o’clock hour last week!

“We want you to enjoy every single moment,” said Bush Hager. “I know we just started a new show but you know what, who cares?! I’m not worried about it!”

“The show will be here,” Guthrie, 47, agreed enthusiastically.

“I’ll hold down the fort,” Bush Hager joked. “You will be missed, but enjoy every moment with that beautiful baby.”

“Also, we’re coming over!” Guthrie said before her co-host chimed in, “Yeah, today! Let us know if we can bring something!”

Elsewhere during the heartwarming call, Kotb recalled being at an event with Guthrie, who advised the kids they were speaking to of calling into fruition the things they wanted, ” ‘Say it out loud, even if you whisper. Even if you just say it to yourself out loud. But say it out loud and it changes everything.’ ”

“And I have to tell you, saying it out loud when it came to Hope was a hard thing to do because I wanted it so bad that I felt like when someone asked me, they could see it in my eyes, they knew it, and I said, ‘Well, it’s not up to me. It’s up to God. If it’s meant to be, it will come.’ ”

“But, in my heart, I was like, ‘Please, God, I hope this is something you anticipate for me,’ ” Kotb added, continuing through tears, “And then to get the call, it’s so mind-blowing. You can’t believe someone’s saying, ‘Come and get her. She’s here.’ ”

“All these weeks and months and maybe it’s even been years, Hoda, we’ve known it’s in your heart to have another baby come,” Guthrie said. “Lots of times I think about it and I don’t know where it is in the process … to continue to hope is the greatest courage. I loved seeing your hope answered and your hope fulfilled. When you told me her name, I could not take it. It’s just so perfect and it’s so beautiful.” 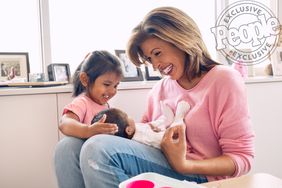 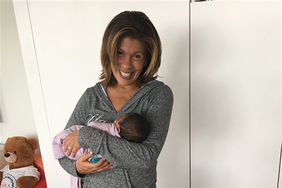 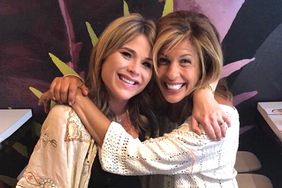