Hilaria Baldwin Takes Selfie While Breastfeeding Newborn Son: 'We Are Champs at Multitasking'

Moms, they get the job done!

Hilaria Baldwin shared a sweet photo on Friday that proved that she and newborn son Eduardo "Edu" Pao Lucas, her fifth child with husband Alec Baldwin, are already breastfeeding pros.

In the selfie, the Mom Brain podcast co-host, 36, was busy posing for the camera, brushing her teeth and caring for her baby boy.

“3.5 days in and we are champs at multitasking,” she appropriately captioned the photo.

Although like most new moms, Hilaria hasn’t been getting as much sleep as she’s used to, she still found the time to do something extra special for her son Leonardo Ángel Charles, who's celebrating his fourth birthday on Saturday.

“I’ve been deliciously tired, but Leo wants a chocolate cake for his bday, so I was determined not to let him down and bake for tomorrow,” she wrote alongside an image of herself busy in the kitchen.

In the photo, Hilaria stirred the cake batter in one hand, while also cradling her newborn, whom she lovingly referred to as her “sous chef.” Hours earlier, she also shared a sweet photo of her boys, noting that while her newborn son was just three days old, his older brother was 3 years old.

In addition to their latest bundle of joy, Hilaria and Alec are parents to Romeo Alejandro David, 2, Rafael Thomas, 5, and Carmen Gabriela, 7. The actor, 62, is also a father to daughter Ireland, 24.

Offering fans a glimpse into life at home as a mother of five, Hilaria shared her first family photo featuring all of their children on Friday.

Although Alec and Hilaria looked like they were ready for a nap in the image, their children, who were lounging on the couch beside them, were fully alert.

"Yesterday, when we got home with Edu, after the [initial] wildness of meeting him, we watched a movie of their choice. Two tired parents, all of our Baldwinitos together ... hearts full," she captioned the family snapshot.

RELATED VIDEO: It's a Boy! Alec and Hilaria Baldwin Welcome Fifth Child Together: 'We Couldn't Be Happier'

The author and fitness expert announced her son's arrival on Wednesday, alongside a photo of the couple in the hospital with their newborn.

"We had a baby last night. He is perfect and we couldn't be happier,” she wrote, going on to reveal his name just one day later.

"We would love to introduce you to Eduardo Pau Lucas Baldwin," she wrote the following day alongside an adorable snapshot of her newborn. "His name means 'wealthy guardian of peace and light'. We love you baby Edu." 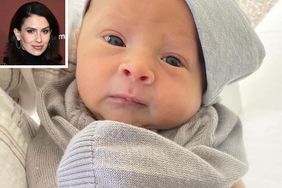 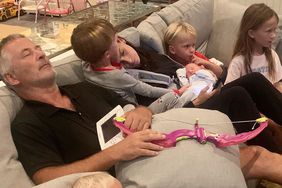 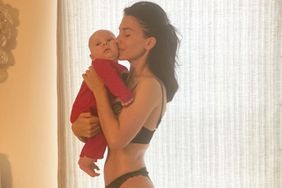 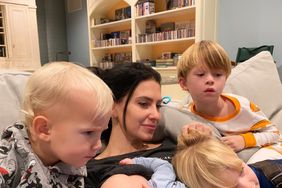 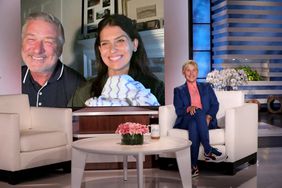