Hayden Panettiere showed off her growing baby bump on the beach in Miami on Friday.

Hayden Panettiere showed off her growing baby bump on the beach in Miami on Friday.

The Nashville star, who’s expecting her first child with fiancé Wladimir Klitschko, wore a blue-and-white striped Lisa Blue bikini accented with a tiny gold whale fin charm (in a nod to her role as spokeswoman for the Whaleman Foundation, which is dedicated protecting whales and dolphins).

Panettiere, who announced her engagement to the heavyweight boxing champ in October 2013, said in an interview with Glamour magazine earlier that year that she was looking forward to having a family.

“I feel like I was born to be a mother,” she said. “Sometimes people speak about [having kids] like, ‘Your life ends — you’re never going to be able to do anything again! And I’m like, What are you talking about?’ ”

The actress, 24, who put her wedding on hold because of unrest in Klitschko’s homeland, Ukraine, says motherhood “is the most beautiful, exciting thing.” 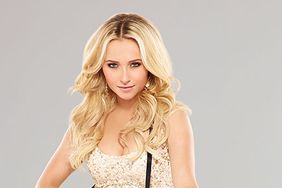 Hayden Panettiere Bares Her Bump in a Crop Top