Congratulations are in order for The Girl on the Train’s Haley Bennett and Darkest Hour director Joe Wright as they are expecting their first child together, a source confirms to PEOPLE.

Wright, 46, is already father to sons Mohan, 3, and Zubin, 7, with ex-wife Anoushka Shankar. It will be Bennett’s first child.

According to Page Six, the baby is due this winter. “They are very happy,” a source told the outlet after saying Bennett, 30, is about six months along.

Bennett and Wright first sparked romance rumors just days after news of his split with Shankar was reported in January.

The actress and the director kept their relationship relatively under wraps until September when Bennett shared a photo of herself and her love.

“Cling to me, Joe, my bliss,” Bennett captioned a photo of herself and Wright passionately kissing.

Bennett shared a photo from the film on Instagram, writing “Joe and I [had] the chance to preview #PawelPawlikowski #ColdWar last night at #NYFF. Powerful and Thrilling. I humbly suggest you see this little masterpiece when it arrives in select theaters in December.”

The Atonement director was previously engaged to Rosamund Pike. The pair met on the set of the 2005 film Pride & Prejudice.

The couple got engaged in 2008 and were meant to marry that same year, however, the director suddenly called off the wedding. 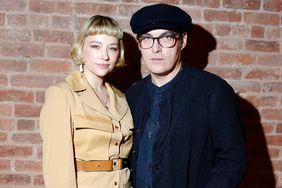