Gwen Stefani has a brand-new teenager on her hands!

Shelton, 45, was all smiles in another photo from the celebration posted by his wife, whom he wed in July. The couple and Stefani's three children appeared in the image with the birthday boy posing in the middle.

Stefani also shared an adorable shot of her son whacking a Spider-Man piñata as a toddler with the caption, "Babies grow up."

Rossdale, 55, also celebrated the special occasion by sharing a video of Zuma practicing his boxing skills!

"My sweetest boy turns 13," the British musician posted. "@zuma_rossdale21 you - young man are the most precious part of my life - thanks for all the light you bring - also head of security position is open 🖤."

In July, insiders shared details with PEOPLE about the Stefani and Shelton's nuptials and their life as a family of five. One source said Shelton "loves the kids and had no problem adjusting to a new role as an extra dad."

Another industry insider said Stefani and Shelton "each put the other first and appreciate each other. They are seamless as a family."

An additional source close to the couple told PEOPLE, "[Stefani is] able to lean on Blake to be an extra dad," adding that Shelton has been "a wonderful role model for Gwen's sons."

"The kids love him and have a really special bond with Blake," the source added.

On Father's Day, Stefani posted a sweet tribute to her then-fiancé — calling him "the most generous patient loving funny guy I know" — alongside sweet photos of him smiling for the camera with her children.

Still, Shelton said there is "definitely nothing easy" about being a stepdad during an interview with KFROG's The Ride with Kimo & Heather in February. He revealed he takes his job "very serious."

"I don't know if it's as hard or harder or not as hard as being an actual, biological parent, you know?" he said. "I have a stepfather in my life who's one of my heroes. I love my stepfather and I look up to him and he's like a father to me, so I have a good inspiration in my life for how to do this and the kind of stepdad I want to be."

He added: "But I also have a blast with it, I'm not gonna lie. I don't take it so serious that I'm not enjoying this time because I really am, especially now that we're five years into this thing. I can't imagine my life without these kids now." 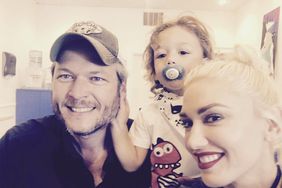