JAY-Z and Beyoncé's daughter Blue Ivy may be just 6 years old, but she's already calling some shots in the Carter clan

Blue Ivy may be just 6 years old, but she’s already calling some shots in the Carter clan.

The First Family of music turned heads on Sunday as they attended the 2018 Grammy Awards together, and it seems little Blue had to keep her superstar parents, Beyoncé and JAY-Z, in line.

Footage from the ceremony showed the little girl motioning for her parents to quiet down as they applauded while Camila Cabello gave a moving speech. As the couple — who welcomed twins in June — clapped, Blue was shown putting up her hand and gesturing toward both her mother and father.

“Blue let them know who’s REALLY in charge here,” one Twitter user wrote in response to the clip of the adorable incident.

Another tweeted, “THIS VIDEO BLUE TELLING BEYONCE AND JAY-Z TO STOP CLAPPING SO SHE COULD LISTEN TO CAMILA TALK IS ALL I NEED IN LIVE.”

JAY-Z, who was nominated for eight awards, looked dashing in an all-black suit, while Beyoncé wore a custom high-neck black velvet gown by Nicolas Jebran featuring cut-out shoulders and thigh-high slits on either side, finishing the look with shoulder-length earrings, dark shades, a large black hat and purple lipstick.

The couple’s oldest child manages to steal the spotlight every now and then. Recently, she showed off her rapping skills on “Blue’s Freestyle,” which is a cut from JAY-Z’s 4:44 album.

Just as one may expect from the daughter of a pair of music moguls, Blue rapped, “Everything everything this is my only single thing/Everything I hear is my answer/And if you think I say, then innocent if I say?/ I never hear that, I be in the posse.”

Blue has been featured heavily in her father’s work, and most recently appeared in his “Family Feud” music video, along with her mother and several other A-list stars. 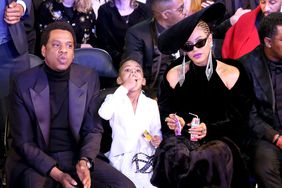 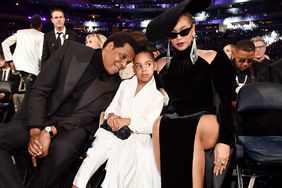 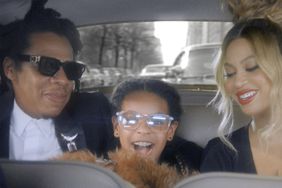