Good Charlotte Rocker Is a Dad!

Good Charlotte guitarist Billy Martin and his wife Linzi, a hairstylist, have welcomed a son, the rocker tells PEOPLE exclusively.

Dreavyn Kingslee Martin was born on Jan. 26 in Pasadena, Calif. He is the first child for the couple.

“Mom is doing great, baby is healthy,” Martin tells PEOPLE. “I couldn’t ask for anything more.”

Adds Martin: “It is hands down the most amazing thing that has ever happened in my life. We can see so much of my wife and I in him already!”

Martin, 27, is the second member of Good Charlotte to become a father – singer Joel Madden and girlfriend Nicole Richie welcomed daughter Harlow a year ago.

Martin and his wife Linzi, 25, will celebrate their first wedding anniversary – and ninth year as a couple – on March 1.

Up next for Martin, an accomplished painter and illustrator with his own T-shirt line, Level 27: a new Good Charlotte album followed by a children’s book that he wrote and illustrated called Damious McDreary: A Boy and his Bat, which will be released this fall. 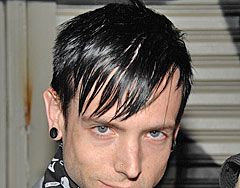 Good Charlotte's Billy Martin To Be a Dad