Nicole Kidman has her family by her side for the Golden Globes.

On Sunday night, The Undoing actress, 53, appeared virtually for the 2021 Golden Globes broadcast during the opening monologue, seated on a couch, all dressed up in a Louis Vuitton gown beside her husband Keith Urban, and their two daughters, Sunday Rose, 12, and Faith Margaret, 10, whom generally remain out of the spotlight.

Speaking with Marie Claire Australia for the magazine's November issue, Kidman said her country singer husband has to retreat from their "female-heavy" family from time to time. The couple tied the knot in 2006.

"We're definitely female-heavy! But as the girls say, 'The dog's a boy!' " said Kidman at the time, adding: "At times, [Keith] just needs to escape with his guitar. Sometimes I'll find him in his closet playing guitar. That's when I know we really need to give him space."

"Oh, and he Googles cars — I'll know when he's stressed 'cause he's Googling cars," Kidman — who is also mom to two adult children with ex-husband Tom Cruise, son Connor, 25, and daughter Isabella, 28 — continued. "I couldn't care less what car I'm driving; you can pick me up in any old thing. But Keith and Faith love cars."

Kidman also opened up about juggling parenting duties with Urban as they balance their busy careers.

"We never leave the kids, one of us is always there," said Kidman. "When Keith went to Nashville and I had to work late nights, I rang [my sister Antonia] and asked her to move in with the girls and she did, and brought along her kids. That's special."

"It's the nature of what we're all having to do now – you get to be commune-like; this extended family where you're all raising each other's kids together," she continued. "We've all had to go back to basics, and this year has required it because people are pleading for help." 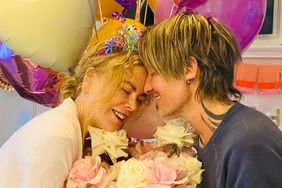