If there was an award for the 2018 Golden Globes‘ sweetest date, Angelina Jolie would have it in the bag.

The actress and noted humanitarian, 42, appeared on the red carpet at Sunday’s ceremony in Beverly Hills, California, wearing a black gown with a sheer neckline.

Her companion? Her second-oldest child, son Pax Thien. The 14-year-old matched his mom in a black velvet tuxedo complete with a “Time’s Up” pin.

Jolie is set to present at tonight’s event. She is part of a bevy of female stars including Helen Mirren, Emma Watson and Jennifer Aniston who will present — many of whom have committed to wearing black for the evening in support of the Time’s Up campaign.

In December, Pax and his siblings Knox Léon, 9, Shiloh Nouvel, 11, and Zahara Marley, 13 on Monday, accompanied Jolie to the 2017 United Nations Correspondents Association Awards at Cipriani Wall Street, where she was honored as the 2017 UNCA Global Citizen of the year.

And although Vivienne Marcheline, 9, and Maddox Chivan, 16, were missing from the group, a source told PEOPLE at the time, “Vivienne had an upset tummy and big brother Maddox stayed with her.”

Jolie filed for divorce from the children’s father Brad Pitt in September 2016, after two years of marriage. In December, a source told PEOPLE that the proceedings are going smoothly.

“Angelina is busy with everything she is doing, including being a super mom to her kids,” said the source. “But she is doing fine and working with Brad on ways to continue their lives so everyone is happy.”

Revealed another source of Pitt, 54, “He is okay and remains committed to his family.”

The 75th annual Golden Globes are presented live at the Beverly Hilton in Beverly Hills, California, on Sunday. The show airs at 8 p.m. ET on NBC. 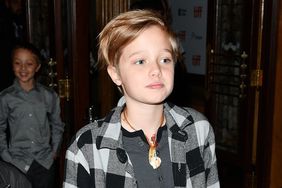